I'm Making Up For Lost Time 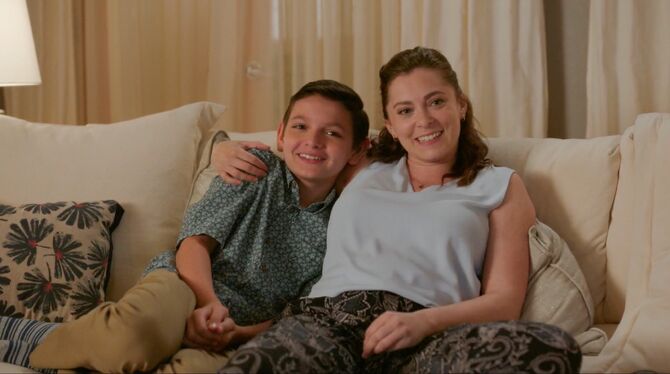 I'm Making Up For Lost Time

In Santa Fe, New Mexico, an argument with his mother leads Tucker Bunch to reread a birthday card and put on Fett Regoso sneakers sent to him by his half-sister Rebecca. Over in West Covina, Rebecca is working at her new Pretzel shop and talks to Paula about having a better relationship with Tucker. Paula leaves for work after sending her son Brendan to take his brother Tommy to school. Rebecca talks to her new employee AJ about her mother issues when they are interrupted by Tucker's arrival. Rebecca is surpised at thier similarities and take the rest of the day off to spend time with Tucker only to be stopped by Nathaniel. He declares his love for Rebecca but she brushes him off since she has to look after Tucker.

At Rebecca's house, the Bunch siblings commiserate over thier awful father when Heather suggests Rebecca talk to Tucker's mother. Tucker gives his moms texting info before excusing himself to use the bathroom. It’s there he answers the incoming messages himself and looks at an old diary with Rebecca's name on it. At the firm, Nathaniel tells Mrs. Hernandez and Sunil he's considering one of them to work on a big case. Sunil makes a deal with Nathaniel to get him Rebecca back for the job. Meanwhile, Paula drops by Rebecca’s house with Brendan and Tommy. She has escape room tickets and invites Rebecca and her brother. Tucker can't participate as he's claustrophobic so they go on without them.

At Tucker's suggestion he and Rebecca go to Los Angeles to visit the Walk of Fame. While they are there they see a long line of young boys trying out for a musical production of "Peter Pan." Rebecca find out that Tucker loves musical theater like she does. He also likes her favorite animated movie and its theme song which he sings (♫ One Indescribable Instant (reprise) ♫). Impressed with his talent, Rebecca decides to let Tucker audition and is unaware Sunil is spying on them. At the mall, the Proctor family starts the escape room which Brendan and Tommy actually begin to enjoy. Paula is shocked to learn her sons hang out at Renaissance fairs together and Brendan once had a serious relationship.

At the LA "Peter Pan" casting office, Rebecca runs into actor Colin Crowley who is playing Captain Hook. He manages to get Tucker a chance try out for the lead role. Tucker ruins his shot by launching into a spiel about becoming a superstar (♫ I Want To Be A Child Star ♫). The casting agents are disturbed by his monologue and end his audition. Rebecca pleads with the director Angela to give Tucker another shot but she declares the auditions are over. Rebecca learns from Colin the hotel the director is staying and disguises herself as a bellhop with Tucker hiding in a serving cart. They go up to the director's room but leave after she refuses to hear him sing.

Sunil witnesses this and fails to convince Angela to cast Tucker as well. He resumes spying on the siblings and sees Tucker in possession of his sisters diary. At the mall, Paula continues to find out she knows very little about her sons. Later, Nathaniel chooses Mrs. Hernandez to handle the account and learns about the diary from Sunil. Over at Rebecca's house, Tucker notices Nathaniel lurking outside and sends Rebecca away. He makes a deal with Nathaniel to give him the diary in exchange for the lead in "Peter Pan." At the mall, Paula is proud when her sons solve the final puzzle of the escape room. Meanwhile, Rebecca receives a call from Angela that Tucker got the part and they go to Rebetzel's to celebrate.

Nathaniel shows up and asks to speak to Rebecca alone; she becomes suspicious when he recites romantic dialogue from a movie she is very familiar with. A panicky Tucker then inadvertently reveals he's been manipulating Rebecca with her diary. After sending her brother away Rebecca tells Nathaniel they are done for good since they are bad influences on each other. Back home, Rebecca talks over the situation with Tucker's mom. He's told he can't accept the role Nathaniel bribed the director for and needs to go to therapy. However, Rebecca did arrange musical camp for him during the summer instead of visiting their dad. Before he returns to Santa Fe, Tucker and Rebecca watch "Slumbered" together.