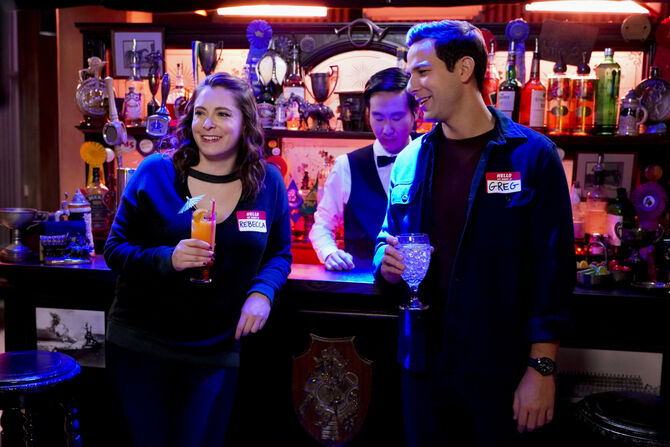 I'm Not The Person I Used To Be

At her home, Rebecca is confused when she finds herself again attracted to her new roommate Josh. She has a similar reaction to Nathaniel while working at Rebetzel's Pretzels. She texts Paula about this but gets no reply as her friend is busy at home with her new pet bunny and studying for her law school finals. That night at Home Base, the Pizarro Hills High School ten year reunion is held. When Valencia arrives for the event, Heather deduces from her friends odd behavior she is looking for an old flame. Former Prom King Josh Chan makes a flashy entrance which annoys his friends WhiJo and Hector. Rebecca also shows up to talk with Heather and Valencia about the possible feelings she has for her ex-boyfriends.

Her friends tell her they always thought Greg Serrano was the one she was meant to be with which Rebecca refutes. She points out she slept with his dad and he could only be a possibility if he returned as a completely different person. Coincidentally they overhear Hector and WhiJo greeting the man in question. Rebecca turns around only to not recognize Greg even after Heather points him out. When Greg spots Rebecca she reluctantly walks over to say hello and they agree to catch up later. Rebecca tells Valencia and Heather that she has to let Greg know what happened between her and his father. Meanwhile, Josh gives a speech to the alumni which makes Greg decide to ditch the reunion.

Greg then asks Rebecca if she wants to talk now and together they leave Home Base. While Heather tries to find Valencia's lost love, Hector confronts Josh who feels that as former Prom King he had the right to give an address. Hector tells him it was actually WhiJo who won years ago but let Josh have it. Accross town Rebecca proudly shows off Rebetzel's to Greg. After excusing herself she tries and fails to reach Paula again. When Rebecca returns Greg confesses he’s been back to West Covina before this but kept his visits a secret from her. Rebecca is about to reveal what happened with Marco but Greg insists they renew their friendship with a clean slate (♫ Hello, Nice To Meet You ♫).

Back at Home Base, Valencia opens up to Heather about her mystery lover. They were chemistry lab partners which led to more. It became something real and ultimately Valencia choose this person over Josh. She wrote a letter declaring her love and slipped it into the lab partners varsity jacket. Valencia never got a response and the two have been avoiding each other ever since. Elsewhere, Josh is still processing the truth when he notices George and the high school magic club. Back at Rebetzel's, Greg is about to leave as his father, now a recovering alcoholic, wants to talk to him. Realizing Marco is likely going to tell his son about their tryst she gets Greg to stay and learns he is no longer engaged.

Retrieved from "https://cxg.fandom.com/wiki/I%27m_Not_The_Person_I_Used_To_Be?oldid=18256"
Community content is available under CC-BY-SA unless otherwise noted.