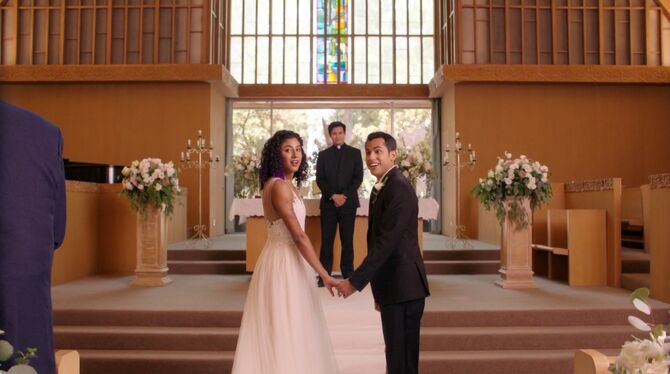 I'm On My Own Path

At the Los Angeles County Court, Rebecca finishes meeting with the bar association to get her law license restored. Paula is eager to have her back but Rebecca is unenthusiastic. At her therapy session Dr. Noelle Akopian suggests there are other professions Rebecca can try. As Rebecca leaves she runs into Josh Chan who is there to see Dr. Davit Akopian. Rebecca apologizes to Josh for her actions the last few years and Josh expresses regret for mistakes he’s made. He also tells her he's ready to start dating again. Over at Home Base, Hector mentions to Heather he hurt his toe in a surfing competition. Meanwhile, when Rebecca arrives at work her she's surprised to see a Pretzel Central opening up in the lobby.

It is own and operated by her co-worker at the firm Jim who quit being an attorney. When his employee AJ reveals he is pre-law, Jim tries to discourage his career choice (♫ Don't Be A Lawyer ♫). At the firm, Rebecca is greeted by Bert and given the cold shoulder by Nathaniel. Later, Rebecca reassures the firm’s biggest client Wendy Legrand she'll handle her business issues. However, Rebecca has a sudden panic attack and applies for a job at Pretzel Central. Over at Home Base, Josh is on a date with an ex-classmate from high school classmate excited to be with the former homecoming king. When she learns he once go-go danced in a gay bar, lives with his friends mom and is in therapy she makes an excuse and leaves.

Over at Pretzel Central, Rebecca tells Paula she's temporarily working at the Pretzel shop until she is reinstated. Back at Home Base, Hector tells Heather a doctor he consulted with about his injury told him to go to the hospital. Heather suggests they get married so he can use her health insurance. They are wed by a judge in a quick ceremony and become emotional when the significance of the moment dawns on them. Elsewhere, Josh stops by Pretzel Central after hearing Rebecca is working there. When she learns his dating life hasn't been great Rebecca steps in and selects a possible match for him on a dating app. Upstairs at the law firm, Wendy demands the return of Rebecca to handle her case.

Downstairs at the Pretzel Central, Rebecca's tries new recipes only to be warned by Jim they can’t deviate from corporate guidelines or they’ll be shut down. Later, Bert, Paula and Wendy visit Rebecca who reassures them she’ll be back once her suspension ends. When they leave AJ asks Rebecca when she’s going to tell them about the reinstatement letter. Elsewhere, Josh studies up for his date with an art history major while Heather and Hector arrive home. When Hector suggests they have a wedding ceremony Heather convinces him otherwise. At Pretzel Central, AJ reveals he got the letter from the trash and Rebecca pleads with him to keep quiet until she figures things out (♫ Our Twisted Fate ♫).

That evening, Heather finds Valencia and her girlfriend Beth waiting for her at her house. Hector contacted them earlier about planning a wedding but cancelled after Heather talked him out of it. At Home Base, Josh finds out his date just wants a fling with a hot guy and not a real relationship. The next day at Mountaintop, Rebecca returns to work at the firm and has a meeting with Wendy. She abruptly leaves when Jim calls her about a rep from corporate about to shut him down for her various violations. Rebecca is unable to help and Jim decides being a boss is not worth it and intends to be a lawyer again. Afterwards at Home Base, Rebecca and Josh commiserate about their problems.

Josh now refuses to cater to others expectations of him and wants to just be himself. This inspires Rebecca who tells Paula the next day she doesn’t want to be a lawyer and plans to reopen Pretzel Central as her own shop. Over at Our Lady of West Covina, Father Brah reveals to Hector that Heather is giving him the wedding he wanted. After changing into a tuxedo, Hector joins his friends and family inside the church; this includes his mother, Josh, Heathers parents, Valencia, Beth along with Paula and Rebecca. After Heather is escorted down the aisle by her father, Rebecca gives a speech about love. Nathaniel is also at the wedding and after hearing Rebecca speak, he realizes that he still loves her.

Retrieved from "https://cxg.fandom.com/wiki/I%27m_On_My_Own_Path?oldid=17910"
Community content is available under CC-BY-SA unless otherwise noted.