I'm So Happy For You 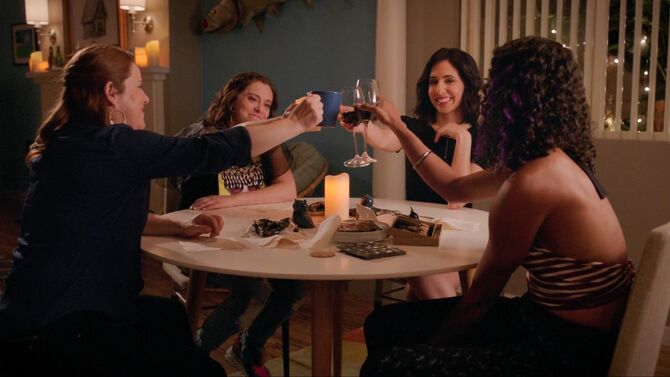 I'm So Happy For You

Rebecca and the Gurl Group are eating at Rebetzel's Pretzels when Heather and Valencia announce they are moving away. Heather and Hector are going to El Segundo where he will teach surfing while Valencia and Beth are moving to New York to join a party planner company. Later at the Proctor residence, Paula gets news as well when Brendan tells her he’s joining the international volunteer group Peeps for Peace. Over at Darryl's apartment, he and WhiJo binge watch Netflix shows. Elswhere, Rebecca admits in her therapy session with Dr. Akopian she’s jealous of Heather and Valencia success in life. She resolves to find less acomplished friends and later goes on a picnic in the park with Maya and AJ.

At Paula's house she searches Brendan's room much to her husband Scott's dismay and finds something to possibly get her son to stay. Back at the park, WhiJo and Darryl are out together along with Heabecca. Both Maya and Tim, who was there with his family, confront the pair with AJ and Rebecca tagging along. WhiJo and Darryl are confused when Maya and Tim demand that they get back together (♫ The Group Mind Has Decided You're In Love ♫). WhiJo and Darryl ignore thier friends advice and discuss a trainer named Vic Josh has been texting. At Rebetzel's, Rebecca tries bonding with Maya and AJ even going as far as inviting them, along with any of their friends, to Heather and Valencia's going away party.

Meanwhile at the West Covina Craft Fair, Paula tracks down an old girlfriend of Brendan's named Venessa Rodriguez. That night, when Rebecca sees Valencia and Heather packing she insinuates they've become too mundane. At the Procter residence, Paula arranges for Venessa to show up for dinner. Later, Scott is ignored when he confronts Paula about her meddling to get Brendan to stay. At Home Base, WhiJo has a good time with Vic but ditches him to go be with Darryl. His ex-boyfriend demands Josh leave after realizing they've been spending too much time together. Darryl makes Josh understand that while he enjoys their friendship it shouldn't hold either of them back from pursuing new relationships.

Elsewhere at the Proctor's house, Brendan and Venessa return from their date and announce she's pregnant to his family. He declares he now has to give up on Peeps For Peace and go back to selling drugs to earn money. Paula is frantic about this until it dawns on her that she's being pranked by everyone. She finally accepts that her son is leaving and Brendan comforts her when she starts crying. Later at Rebecca's house, Valencia and Heather's going away party underway. Valencia's parting advice to Josh is that he move out of Hector's moms house. Rebecca appears wearing hipster fashion and makes a spectacle of herself by acting immature. It's then that Maya and AJ show up bringing along a number of their young friends.

Also arriving is WhiJo and Vic who were invited by Heather earlier. Vic thanks Darryl for giving Josh the push he needed to take him seriously. Meanwhile, Rebecca's guests turn the modest party into a loud and messy affair. At first Rebecca encourages the rambunctiousness and ignores Heather's concerns. However, this changes when she sees a huge dent on her brand new refrigerator. An angry Rebecca then quickly throws all the millennials out of the house. In the aftermath, Rebecca apologizes to the Gurl Group for her behavior. She confesses to her friends that she's jealous of how they all gotten their lives together while she's struggling to figure her own out.

Both Valencia and Heather assures her that's not the case since they’re nervous and uncertain about the new professional and personal lives they’re about to embark on. Valencia tells Rebecca that knowing her changed her life for the better as does Heather who can’t imagine how she would have turned out had they not met. Heather asks Rebecca to look after her pet starfish Estrella. Paula goes home to see her son Brendan who is leaving for his assignment he next day. She tells him how proud she is and apologizes for never believing in him (♫ I've Always Never Believed In You ♫).