I'm So Happy That Josh Is So Happy! 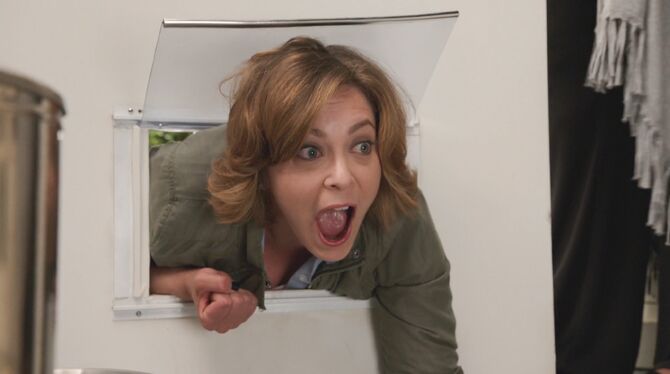 I'm So Happy That Josh Is So Happy!

In her car, Rebecca and Paula watch as Josh and Valencia move thier things into thier new place. Although she won't admit it to Paula, Rebecca is dejected at the latest turn of events. Later at Whitefeather & Associates, her distraction almost costs her firm a potential client. She drinks vodka which ruins an important presentation she was to give to a wealthy business man named Calvin Young. Darryl tells herto go home and pull herself together. Instead of working on the presentation she wallows in self pity (♫ Sexy French Depression ♫). During this time she hallucinates that famed psychologist Dr. Phil is with her giving her advice. Meanwhile, as a surprise for Valencia Josh decides to get a dining table for their place. He gets his crew together at Greg's home to help him assemble the table.

At the same time, Rebecca goes to see a psychiatrist named Dr.Akopian to get some prescription medication. The doctor refuses to do this and instead suggests therapy sessions to help Rebecca get over her depression. Rebecca declines but before she leaves makes a detour to Akopian's restroom where she finds a pill laying on the floor next to the toilet. At the Proctor residence, Paula hosts a private dinner for Clavin Young along with Darryl where she and the client bond immediately. At Rebecca's apartment, the imaginary Dr.Phil pleads with Rebecca not to take the pill which is actually ADD medication. She takes the drug which instantlay gives her an energy boost. However, she spends the entire night working on various tasks and not her presentation.

Her ADD high is brought to an abrupt end when she sees an Instagram photo Valencia posted. It's a picture of her and Josh's bed at thier new place with a hashtag that reads "christened". She calls Heather over who provides some marijuana to bring her back down. At the Serrano residence Josh and his crew fell asleep trying to put the table together. When they awoke White Josh and Greg try to subtlety tell Josh he should break up with Valencia. Meanwhile, a stoned Rebecca and Heather head to Akopian's office to ask again for some prescription drugs. Rebecca spots a blank prescription pad inside and tries to break in through the doggy door to get at it. They are caught by the doctor who offers Rebecca therapy sessions instead of turning the pair into the police.

Meanwhile, Paula has a good time at a jazz club with Calvin Young who asks that she join him back at his hotel room (♫ His Status is Preferred ♫). When Rebecca calls Paula she learns what's about to happen and rushes off to intervene. At Greg's house, Josh and his friends present the finished table to Valencia. However, it's clear she doesn't like it and says it's the wrong style for the apartment. At Calvin's hotel, Rebecca bursts in and tells Paula that having an affair is just like taking drugs; a temporary solution to the actual problem. Paula sadly agrees and the two break down crying over their respective issues; her passionless marriage and Rebecca's sadness over Josh. Calvin joins in the hug still sad over his wife's death several years ago.

Afterwards Calvin says he's so impressed with Rebecca he's going to hire the firm and also tells Paula should fight for her marriage. When Rebecca returns to the law firm the next day Darryl and the rest of the staff applaud her for landing the account. She later goes to Dr. Akopian's psychiatrist office for a therapy session but before they can start she recieves a text from Josh. She rushes out to meet him at the Cup of boba kiosk. After she gives him a rice cooker as a house warming present Josh shows a photo of the table he bought for Valencia. He asks her opinion on it and appreciates it when Rebecca says she likes it. As they are talking the real Dr. Phil shows up to buy a drink. He mistakes then for a couple much to Rebecca's delight.