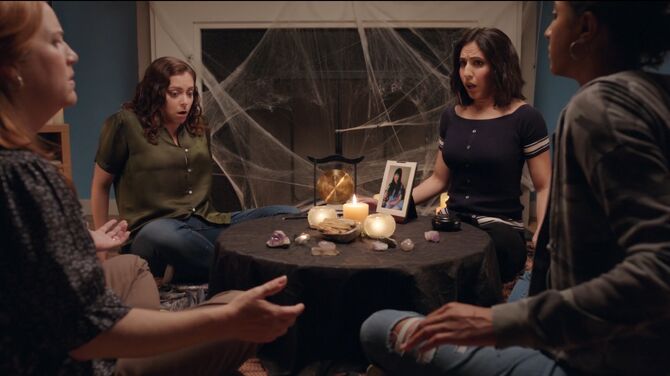 Rebecca is decorating her house for Halloween when Paula arrives with news about an online editorial about her friend's recent release from prison. It criticizes Rebecca being free despite a documented history of mental illness and past crimes. Because of this Rebecca spends three days reading the comment section which is full of negative remarks. Heather tries to encourage her to move past it reminding Rebecca about tickets they have to see a special screening of "Hocus Pocus." Over at the park, Darryl brought his baby daughter Heabecca to a meeting of the Wee Covina’s parenting group. From the other parents Darryl learns about the benefits of breast milk over formula.

At the law firm, Nathaniel shows up to work disheveled after having been on break for weeks. Paula chastises his disappearance which hurt business since Darryl, Rebecca and Jim have been absent as well. Nathaniel then notices his father is here and talking to Bert, the firm’s silent partner. Nathaniel Senior asked Bert, who has a law degree, to step in and run the office. Nathaniel objects but his father insists believing his son is having a mental breakdown. Meanwhile, Rebecca is ashamed her past was exposed and doesn’t want to be judged by everyone in town. She tries and fails to leave the house even after receiving a personal message from Kathy Najimy sent to her by Heather (♫ Time To Seize The Day ♫).

In her room, Rebecca talks to Dr. Akopian on her laptop and her therapist suggests they talk face to face. A loud noise distracts Rebecca who finds a West Covina history book had been knocked off the shelf. The text detailed the multiple deaths in the house Rebecca is living in which involved a college student named Devon Lee caught in the crossfire of a drug deal gone bad. Rebecca shows this book and points out moaning sounds in the house to Heather and Hector as evidence of a haunting. Rebecca believes the ghost of Devon is trying to communicate with her. The next day Rebecca invites Valencia over since she believes in the occult and they decide to hold a seance to communicate with Devon.

Over at Darryl’s apartment he helps his daughter Madison prepare for Halloween before his ex-wife Stacy picks her up. When they leave Daryl goes online to look for breast milk for his baby. He asks WhiJo to look after Heabecca while he purchases some supplies. Meanwhile, Nathaniel is at work annoyed at Bert being in charge and his employees celebrating the holiday. That night at Rebeccas house Valencia and Rebecca are joined by Heather and Paula to do a seance. At Home Base, Nathaniel meets up with an investigator who has dirt on Bert. Back at Darryl’s apartment, Josh stops by with a costume for Heabecca. WhiJo calls Darryl who has been searching neighboring towns trying to obtain breast milk.

At the seance, the women are startled when the table levitates and the power goes out. The outage takes place across town including Darryl’s apartment where he’s returned with a supply of breast milk and also at the firm where Nathaniel tells his father about Berts checkered past. Nathaniel Senior was already aware and placed Bert in charge to pull his son out of his current malaise. Back at the seance, the power returns and Rebecca sees her laptop opened to Devon’s Facebook page. She takes this as sign to visit the deceased students grave. Meanwhile, Stacy and Madison return to Darryl’s apartment. Stacy tells ex-husband that being a great parent to his baby is more important than what he feeds it.

Over at the cemetery, the Gurl Group finds Devon's gravestone and Rebecca speaks to Devon, and to herself, about moving on from past mistakes. Graveyard security J. Castleman appears and sympathizes with Rebecca's plight (♫ The Cringe ♫). The following morning at the law firm, Bert tells Nathaniel he intends to stay. As majority shareholder Bert refuses Senior's orders and also changed the firm’s name as well. That night, Rebecca joins her friends at Home Base where Heather explains ther supernatural experience. A wad of tampons Rebecca clogged the pipes with flooded the house with steam which knocked the book off the shelf, caused the table to float and also creates moaning noises.

Retrieved from "https://cxg.fandom.com/wiki/I_Am_Ashamed?oldid=17857"
Community content is available under CC-BY-SA unless otherwise noted.