I Have To Get Out 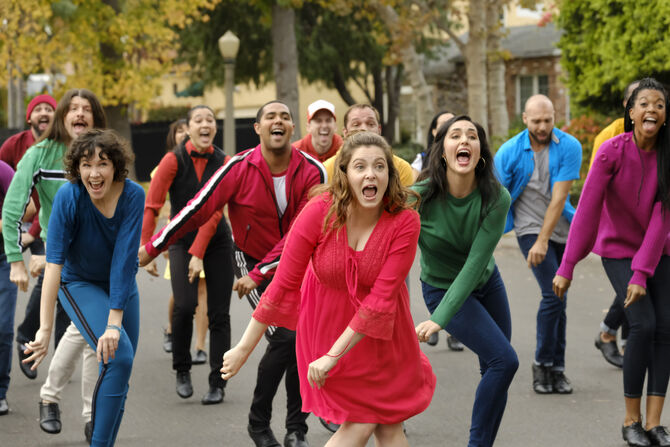 I Have To Get Out

Josh fixes some stuff at the firm, while Jim tells him that he think that Josh has feelings for Rebecca. At her session, Rebeca tells Dr. AKopian that the medication is making her very tired and that she still hasn't talked with Greg since their fight. Rebecca feels that taking medication feels like a co-out because she feels that she should be okay on her own and is ashamed because of it, which makes Dr. Akopian reassures her that everyone is taking the medication and that she's not alone it this (♫ Anti-Depressants Are So Not A Big Deal ♫).

In a talk with AJ she realizes that Rebetzel's Pretzels is not her dream and that she does not know what it is. At the hospital, Paula is studying for her bar exam and asks the doctor to release her today, but her refuses and tells her that she can go home tomorrow morning. Darryl tries to visit Paula, but the room is full so he waits in the lobby where he befriends a woman named April and they go to get coffee. Moments later Nathaniel, Greg and Josh arrive a the hospital. Soon they get exposed to a squirrel flu and are forced to quarantine in the special ward.

Meanwhile, the doctor is late to sign Paula's release papers so Rebecca decides to sneak her out of the hospital so she can go to her bar exam. Due to her medication, she falls asleep on the gurney and is taken to the morgue (♫ End of the Movie (reprise) ♫). After waking up, she realizes that she wants to chase her dream of being in a musical.

Nathaniel suggests that all three of them should be friends and accidentally reveals that Greg has been in town for a while, which makes Josh disappointed that he hasn't told him. This causes Josh and Greg to fight with Nathaniel trying to calm them down. (♫ Real Life Fighting is Akward ♫)

Valencia, Heather and Rebecca help take Paula out of the hospital and she gets to her bar exam in time. Elsewhere, Rebecca admits to Greg that she tried to sleep with Nathaniel and Josh in the previous episode. They agree to be just friends, which makes Josh and Nathaniel both happy.