I Hope Josh Comes to My Party! 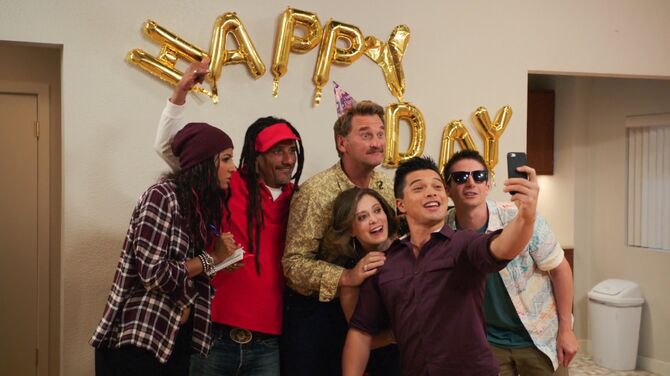 I Hope Josh Comes to My Party!

Paula comes up with the idea that Rebecca should throw a house party so that she can invite Josh and not break the rule Valencia made that he can't be alone with her. Rebecca is reluctant due to a childhood trauma she experienced when she threw a PPV party at the same time her father left her. Paula manages to convince Rebecca to face her fears as the party is the best shot she has at getting any alone time with Josh (♫ Face Your Fears ♫). Inspired by her friend, Rebecca confidently spends the next day handing out fliers to random strangers for her party (♫ I Have Friends ♫). She stops by Home Base and invites Greg who declines pointing out how badly the last time they hung out together went.

When she spots Josh she eagerly asks him to attend her party and he accepts the invitation. Rebecca then goes to see her next door neighbor Heather Davis and invites her as well. Heather is intrigued by Rebecca and agrees to go only because as a psych student she finds her to be a good case study. Sometime later Rebecca prepares her apartment for the party just as Paula arrives with decorations. Before Paula can help out she is called by her son Tommy's school and told she needs to see his principal. When she arrives she learns her son stole the answers to a test. Over Paula's objections, the principal tells her because of this incident and other difficulties with Tommy in the past he is being transferred to another school.

After the meeting is over she goes to Rebecca's place with Tommy in tow and discovers that only a handful of eccentric individuals showed up. This included her boss Darryl and Heather who was documenting the proceedings on her phone. Paula reassures a hysterical Rebecca that she'll fix this and leaves to find more guests. While Rebecca struggles to bring some energy to the festivities, Paula and Tommy drive around and find a Gamblers Anonymous group. They invite them to the party just as Josh arrives at Rebecca's apartment. He is taken aback by how lame it is as Rebecca fails to spin it positively. She then comes clean about how the party didn't turn out exactly as she had hoped.

Josh tells Rebecca this result was understandable since she just moved to town and hadn't made a lot of friends yet. He suggests he could easily get more people to show up if she wanted him to and attempts to make it happen. He takes a selfie of himself and the other guests arranged to make the party look better than it appears. He then posts the photo on his social media pages which coincidently coincides with Paula showing up with the Gambler's Anonymous people. The new guests liven up the festivities as Josh and Rebecca mingle. Greg also shows up for the party too as he figured this was where all his regular customers ended up. He also wanted to see for himself how badly things would turn out for Rebecca.

He admits he was wrong to Rebecca who tells him the party's success is all thanks to Josh (♫ A Boy Band Made Up of Four Joshes ♫). She then notices Josh has gotten a text from Valencia who just got home from her trip. Rebecca is pleased when he decides to stay instead of leaving. Afterwards, Rebecca thanks Josh for helping her out and is congratulated by Paula for throwing a great party. Rebecca gifts a bottle of whiskey to a drunk Greg and calls a car from Uber to get him home. The next day Rebecca accompanies Paula to Tommy's school for her meeting with his principal. With Rebecca lending assistance outside the principal's office Paula is able to face her fears and have her son reinstated.