I Need to Find My Frenemy 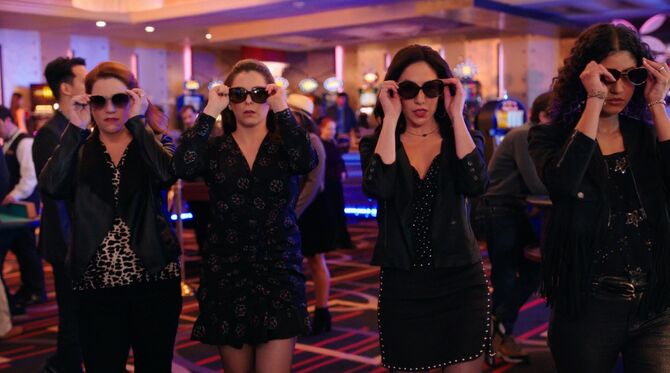 I Need to Find My Frenemy

At home, Rebecca is depressed about her recent failed musical theater attempt when Josh suddenly declares his love for her and she leaves without responding. Meanwhile, Paula takes a tour of her new firm East Briar Law Group and is given a 10,000 dollar signing bonus. Over at Home Base, Heather deals with Hector's irresponsibilty while Valencia reiterates her marriage ultimatum to Beth. Her bluff is called when Beth tells Valencia she is headed back to New York without her. At Rebetzel's, Rebecca talks to AJ about her love problems when Darryl suggests she compare her options. Rebecca creates a whiteboard listing Josh, Nathaniel and Greg's best traits but can’t come to a decision (♫ The Math of Love Quadrangles ♫).

She receives a FaceTime call from David asking that she find his wife and her frenemy Audra Levine. She abandoned her family for Las Vegas and Rebecca agrees to look for her to avoid her own romantic troubles. She enlists the help of her Gurl Group to assist her. At the same time Josh confronts Nathaniel in the office lobby demanding he "stand down" in his pursuit of Rebecca. When Nathaniel refuses Josh notices the whiteboard at Rebetzels with his, Nathaniel and Greg's name on it. Both men are disturbed at the sight and agree they will both "stand down." In Las Vegas, Rebecca arrives at Audra's last know location - the Majestros Casino alongside Paula, Valencia and Heather (♫ Slow Motion ♫).

At the service desk they are able to get Audra's room number from guests who are complaining about her. Although they find Audra, she gives them the slip and they have to track her down to the casino. Audra reveals that she has no intention of returning and says her actions are inspired by Rebecca's impetuous decision to move to West Covina.

Josh and Nathaniel come to Greg's restaurant and ask him to "stand down" and tell him about the whiteboard. Darryl leads them all to the whiteboard where Greg decides to stands down. Back at the casino, Valencia sees her frenemy Denise Martinez who pressured her boyfriend into proposing to her. Gurl Group follows Audra to a secret poker game where they are forced to wait til the game ends. Audra in conversation with the Gurl group says that they're here because their lives are miserable and that the only happy person is Rebecca because she is decisive and makes good choices. Audra's boyfriend gets kicked out of the game and Paula replaces him and wins (♫ Slow Motion (reprise) ♫).

Rebecca admits to Audra that her life is not perfect and that she struggles with making decisions. Audra in return admits that she went to Vegas just because things with her family got hard and they realize that they actually have some good things to say about each other (♫ JAP Battle (reprise) ♫).

Back in West Covina, at her new firm, Paula realizes that she doesn't have to fit in with buying suits. Over at the Home Base, Heather sets boundaries with Hector by saying that they're equal partners. Valencia talks with Beth and gets shocked when she realizes that she can also propose.

Meanwhile, Greg asks White Josh if he's really just content being friends with Darryl or he's waiting to see if there's more, to which he says that they're content with being friends. He also clarifies that Greg and Rebecca's situation is not the same and that they have "something special". In the end, the three men propose to Rebecca to go on dates with all three of them and see which one suits her best.