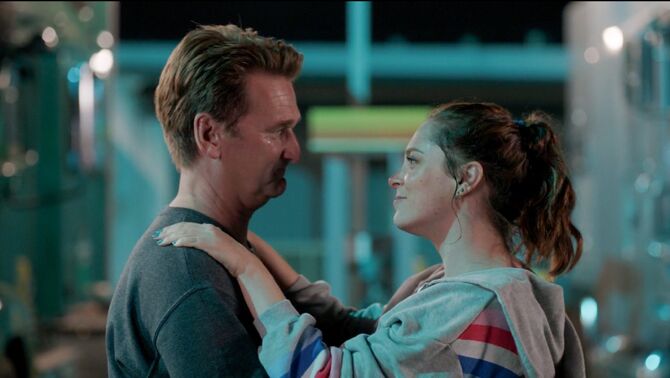 Rebecca is FaceTiming with Valencia and Heather and mentions wanting a respite from therapy. She plans on going to Harry's Hog Shop in Irvine and sends a text to everyone nearby in her social circle to join her. Later at Rebetzels, Rebecca tells AJ all of her friends said no except for Darryl. Over at the Proctor Residence, Paula tells Scott about an antique desk she ordered to study for her finals. It's located in San Bernadino so she will go with a delivery man she hired to pick up the item. She is later surprised to find out the hired hand is Josh Chan. At Home Base, Nathaniel is having a meal when Bert delivers his mail. Upon opening a packet he races out of the bar in a hurry.

On her way to the El Sagundo Home Base, Heather spots Nathaniel whose car has broken down. At Rebecca’s house, Darryl arrives for the trip and she makes it clear she just want a relaxing day before they leave. Elsewhere, Paula accompanies Josh to pick up her desk and gets annoyed as he drones on about his life. At the same time, Heather gives Nathaniel a ride to Santa Monica. She is bothered by his entitled attitude and criticisms that her car is filthy. Meanwhile, Darryl pesters Rebecca her about her feelings as she drives them to the restaurant. As the three different pairings continue thier travels the road trips become more miserable (♫ Trapped In A Car With Someone You Don't Want To Be Trapped In A Car With ♫).

Paula and Josh reach their destination but instead of taking the desk they stay to hear the seller Mrs. Beattie talk about her porcelain animal collection. On the highway, Heather is curious about the parcel Nathaniel has when she is forced to pull over after her car starts breaking down. Over in Irvine, Rebecca and Darryl arrive at Harry's Hog Shop but she wants to call the excursion off when he overshares personal details to the hostess. When she complains about Darryl's behavior he feels Rebecca is being too harsh and walks out. At Mrs. Beatties house, Josh the desk onto his vehicle despite Paula trying to stall. Outside the BBQ restaurant, Rebecca apologizes to Darryl who suggests they just go eat instead of talking.

On the side of the road, while Heather checks on her car engine when she gets fed up by Nathaniel criticisms of her. She tells him she never liked him and angrily starts to play tug of war with the parcel in his possession. The contents spill out covering her and Nathaniel in his beloved dead au pair Heidi's ashes. Nathaniel explains he was charged with scattering a portion of her ashes in the ocean. Back the BBQ restaurant, Darryl and Rebecca have a good time enjoying the food and each other's company. Later on the car drive back home they both sing a song Rebecca wrote (♫ This Song Goes in a Loop De Loop ♫). As they are still covered in BBQ sauce they decide to make a detour at a Truck stop to clean up.

Back at Mrs. Beattie's house, Josh confronts Paula about her obvious procrastinating due to her fears of nearly achieving her dreams. Meanwhile, Heather comforts Nathaniel who wonders why he can’t have relationships like he had with Heidi and Rebecca. After suggesting he tries being nicer, Heather notices a way to fulfill Heidi's last request. They go to a city vent nearby that drains into the ocean and dump all the remains ashes still clinging to their clothes. That night at the Truck stop, Darryl in the process of cleaning himself is forced to shave off his mustache. Rebecca hugs Darryl which leads to them almost kissing. Back at the Proctor residence, Josh places the desk in Paula‘s office.

Paula thanks Josh for forcing her to acknowledge and move past her fears. She then encourages Josh to move out of Hector's moms house as he needs to move on as well. Over at Darryl's apartment, he and Rebecca discuss the near kiss they had and admit to one another romance isn’t in the cards for them. Rebecca does see it as a good sign for her that’s she was attracted to a nice guy for once. The next morning at Home Base, Nathaniel apologizes to Bert for treating him poorly. He gives Bert a kiss on the forehead to express affection unaware of how awkward the gesture is. Heather interrupts to tell Nathaniel she just leased a brand new car which he considers a good deed he’s responsible for.