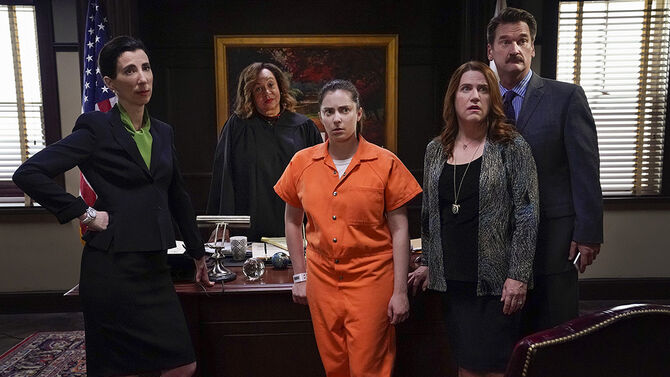 I Want To Be Here

After entering her guilty plea, Rebecca Bunch is joined by Paula Proctor in the judges chambers along with the prosecutor. They are waiting for Rebeccas attorney Nathaniel to show but Darryl tells them he left and offers to step in as counsel. Over Darryl and Pauls objections Rebecca insists to the judge she be incarcerated refusing to change her plea. The judge sends Rebecca to the state penitentiary for six weeks hoping she will change her mind. While Rebecca is checked into prison, Nathaniel prepares for a "Deathwish Adventure." George is helping him prepare but feels Nathaniel should deal with his actual issue Rebecca instead of avoiding her by going on what’s essentially a camping trip.

Over at Home Base, Josh asks Hector why he’s been oblivious to so many things. He ignores his friends suggestion about being too self absorbed and instead believes his lack of awareness is a mental disorder. Days later at the prison, Rebecca's continuous self-castigation annoys her cell mate Nicky. Rebecca is pulled out of her despair when she finds out about a theater related prison activity. At that class Rebecca convinces the volunteer theater teacher Jasmine to let the inmates perform a musical number (♫ I'm in Love with a Wonderful Guy ♫). During visiting hours, Paula is concerned when Rebecca is more interested in her theater class then any updates on her case.

At a remote location Nathaniel starts his survivalist excursion while back in town Josh looks up psychological afflictions online. Meanwhile Rebecca learns her fellow inmates hated the song she insisted they perform. Rebecca suggests they do an original song based on their own personal stories (♫ What’s Your Story ♫). Thhrough this activity the other prisoners are appalled to learn that unlike them Rebecca is in jail by choice. That night at Home Base, Josh tells Heather and Hector various mental disorders he has. He storms off when they tell him his research is faulty since it’s based on internet click bait quizzes. The next morning at Nathaniel's wilderness retreat he’s forced scavenge to for food.

A fully equipped George shows up interrupting Nathaniel’s breakfast and sets up camp next to him. He gets Nathaniel to admit the trip is just another in a list of activities he’s done over the years to avoid emotional conflict. Back at the prison, Rebecca is visited by Paula, Valencia and Heather who have big news. Trent awakened from his coma and confessed to his crime which means Rebecca will be free soon. Her friends are confused when Rebecca wants to stay in prison to continue doing penance for her personal wrong doings. That night Rebecca, Nathaniel and Josh simultaneously express their sadness at being misunderstood by everyone (♫ No One Else Is Singing My Song ♫).

The following day Rebecca is released from prison and is met outside by the Gurl Group. Over at the wilderness retreat, Nathaniel has given up on foraging and is enjoying the food George brought. However, Nathaniel still feels sad and believes himself to be broken. This musically inspires George (♫ Maybe I'm Just Broken ♫) who is interrupted by a text. They learn Rebecca is free which makes Nathaniel happy. Back in town, Josh is at a therapy session with Dr. Davit Akopian. Davit tells Josh he doesn’t have any disorders and just needs to examine the reasons behind the poor choices he continues to make. Meanwhile, Rebecca is at her place where her friends are throwing her a welcome home party.

Rebecca is still depressed about not being punished and for also having inherent white privilege. This angers Valencia who tells Rebecca to stop whining and use her guilt to do something positive. The party is interrupted by the arrival of Nathaniel who asks to speak to Rebecca alone. At first they are happy to be reunited and express their love for one another. However, Nathaniel is frustrated by Rebecca once again putting off them being together to deal with her current cause. She realizes that they are in different places now and sends Nathaniel away. Rebecca then decides the first step in her plans for redemption is to offer legal advice to the inmates she met in prison.

Retrieved from "https://cxg.fandom.com/wiki/I_Want_To_Be_Here?oldid=18641"
Community content is available under CC-BY-SA unless otherwise noted.