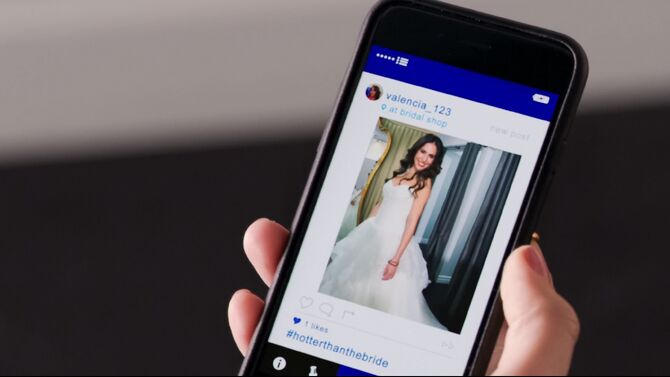 Instagram is an online photo hosting website which allows account users to upload pictures, brief videos or gifs to a virtual "album". These photos can be shared with the public or just family and friends. The website has been integrated with mobile devices through an app to allow immediate file sharing. It is one of several real world social media apps featured frequently on the show. It's first appearance was in the Season One episode "I'm Going on a Date with Josh's Friend!".

In Rebecca's first year in West Covina, her ex-boyfriend Josh Chan and his girlfriend Valencia went on a vacation in Temecula. While on the trip they posted photos and of themselves on Instagram. Josh's friend Greg Serrano later commented to him that they looked like they were outtakes from a porn shoot. Josh also posted on his Instagram account a photo himself at his new job in his father's Radiology job. Rebecca got an push notification of the Instagram picture on her phone and dragged Josh to the Aloha Tech Center where she helped him get the job he really wanted as the store's assistant manager ("I'm Going on a Date with Josh's Friend!").

After the Thanksgiving of 2015, Josh and Valencia decided to move in together which sent Rebecca into a depression spiral. The couple documented the move into their new apartment on their Instagram account. Rebecca tried to cope with this new development by drinking alchohol and taking an ADD medication. Along with a hallucination do Dr.Phil they proved to be good distractions. This ended when she checked Josh's Instagram account and saw a picture of a bed at his new apartment with the hashtag 'Christened'. She got depressed again and called her neighbor Heather Davis for more drugs to numb herself ("I'm So Happy that Josh is So Happy!").

Months later, Rebecca finagled a spot at an on an at risk teen camping to join Josh when he volunteered on a camping trip for troubled teens. At the meeting area for the buses to the campsite, Rebecca ran to see Josh. She asked if he wanted to take a selfie and he agreed mentioning his LPP's were down. Rebecca was confused and he explained he was referring to "Likes Per Picture" on his Instagram account. Before they could take the photo Josh was called away to join his protégés on the bus. Rebecca got another chance to take the photo inviting Josh to a scenic area called 'Blowie Point'. Although they managed to take the photo for Josh's Instagram account, Rebecca was devastated when he mocked an old love letter she wrote to him when they were teens ("I'm Back at Camp with Josh!").

Later, Rebecca had an epiphany about her Josh obsession. She wanted to make things right with Valencia for having kissed Josh. Knowing how the Chans hated Valencia, Rebecca convinced Josh's sister Jayma's to let her be a bridesmaid at her wedding. Rebecca was part of the bridal party as well and unexpectedly she and Valencia started to bond. They were put in charge of getting the wedding dress packed up and for fun they both tried on Jayma's gown. Rebecca used Valencia's phone to take a photo of her in it which was noticed by Paula. She had hacked into Valencia's social media accounts which had automatically sent the photo to the clouds. Paula stirred up trouble by uploading the photo to Valencia's Instagram account with the hashtag "hotterthanthebride" ("Josh's Sister is Getting Married!").

Paula had a falling out with Rebecca after finding out about her friends relationship with Greg. She refused to talk to Rebecca feeling all the work she did to help her pursue Josh was wasted. Rebecca went to Josh's sister Jayma's wedding with Greg who had convinced himself he won her over by being cool and aloof. The facade he put on ruined the chances of the romantic evening she wanted. The wedding had a live photo streaming of the event on Jayma's Instagram account. At her home Paula was watching the feed on her laptop as it occurred. She saw a photo of Rebecca looking sad because of the way Greg was acting and her still unresolved feelings for Josh ("Paula Needs to Get Over Josh!").

In the latter half of 2016, Rebecca moved into a new place with Heather Davis. She also began a new friendship with Valencia Perez and three of them formed a "Gurl Group". They started hanging out more and posting selfies together on Instagram ("Who Needs Josh When You Have a Girl Group?"). Sometime later, Rebecca and Valencia discover at the same time that Josh had a new girlfriend by looking at his Instagram account. They found several pictures of them together at a coffee shop. They learned her name was Anna Hicks and were impressed with how cool she seemed. They spent three days straight looking through her Instagram account and researching her online (♫ Research Me Obsessively ♫) ("Who's the Cool Girl Josh Is Dating?").

Rebecca is angered when her former boss and ex-boyfriend Nathaniel Plimpton III posts pictures of himself and his new girlfriend Mona on Instagram while they are at her favorite theme park Raging Waters. Nathaniel later admits he did this on purpose to get back at Rebecca for dumping him ("Oh Nathaniel, It's On!"). Sometime later, Rebecca receives notifications on her Instagram account from her co-workers at Whitefeather & Associates who are attending Nathaniel and Mona’s housewarming party. She also sees receives an update from Trent Maddock’s account and sees he’s posting threatening pictures and messages about Nathaniel ("Nathaniel Is Irrelevant.").