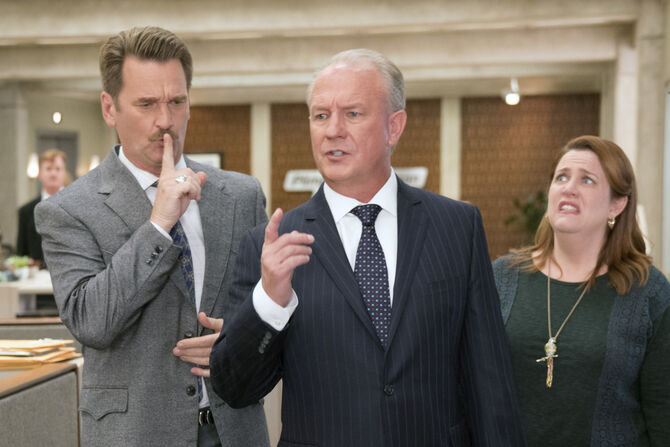 Is Josh Free in Two Weeks?

Rebecca is at her house stressing out about her upcoming wedding happening in less than two weeks. When a delivery man named Patrick shows up she vents her frustrations. Rebecca dismisses Patrick's theory that the wedding date being moved up is related to her boss Nathaniel. Rebecca tells him she’s planning the wedding alone without professions is who weren't willing to work within the time frame. Her mother is busy getting beauty treatments and her best friend Paula is studying for her finals. Later at Home Base, Heather tells Rebecca learns about Do-It-Yourself styled weddings. Rebecca decides to follow this trend and buys supplies from a craft store where she awkwardly runs into Valencia.

At the Our Lady of West Covina school, Josh is with Father Brah and Sara helping out at the kids basketball practice. Brah advises he be more involved with the wedding plans but Josh assures him he's doing his part. At Whitefeather & Associates, Nathaniel is in his office distracted by thoughts of Rebecca. He drinks a cleansing smoothie he concocted and lectures the staff about work ethic when he's told by Paula that Rebecca called out. When Rebecca shows up later she explains to Nathaniel she's been busy and dismisses his suggestion she moved up her wedding date because of their kiss. At work and later at home Rebecca attempts to continue working on her wedding but has underwhelming results.

Josh shows up at Rebecca’s house hoping to inject some of his ideas into the wedding until she agrees to his crane origami on. At the law firm, Nathaniel has a staff meeting in the boardroom which goes awry when he gets an upset stomach from the juice cleanse he drank and continuously passes gas. Meanwhile, Rebecca quickly starts getting overwhelmed by the planning process. The next day Paula stops by and pleads with a manic Rebecca to postpone the wedding. Over at the law firm, a concerned Paula and Maya go to Nathaniel’s office and find him still sick. He’s still in denial about it until he defecates himself in his office chair and is forced to roll to the bathroom.

Across town at the church, Josh tells Sarah about forest green tuxedo he wants to wear at the ceremony and she encourages him to go for it. At the law firm, Darryl convinces Nathaniel to get some rest (♫ Man Nap ♫). Meanwhile, Heather goes to Valencia's apartment to hang out as she’s tired of the wedding stress at her place. Valencia says she’s okay Josh and Rebecca marrying but finds herself directionless now that she’s over her ex-boyfriend. Rebecca herself is at home when her father sends word he can’t attend the ceremony. Patrick is there with her latest deliveries and tries to leave but Rebecca pleads with him to tell her everything is okay before falling asleep exhausted (♫ (Tell Me I'm Okay) Patrick ♫).

Back at the law firm, Nathaniel Plimpton II arrives. Despite Paula and Darryl’s best efforts he finds Nathaniel III asleep. Nathaniel Senior berates his son for showing weakness and leaves the office. Over at Rebecca’s place, Heather brings Valencia over to show off the wedding stuff. They awaken Rebecca who confesses how overwhelmed she is and gives up. The following morning at the firm, Rebecca is in the break room when Nathaniel walks in. She tells him she has to move the wedding date for more time to plan and also to make it possible for her father to attend. Valencia unexpectedly shows up with a wedding planning binder she’s been building the entire time she was with Josh.

She at first offers this for Rebecca to use but then decides instead to offer her services to carry out the wedding plans herself. That night at Rebecca’s place, Josh is shocked to find out Valencia’s in charge of his wedding. The next day, Patrick delivers a package to Paula at the firm who thanks him for the heads up about Rebecca. She gives it to Rebecca which turns out to be a wedding dress from her mother that Paula secretly demanded Naomi buy for her daughter. Later at her house, Rebecca enjoys a Bridal shower party thrown by Valencia. The following evening at the law firm, Nathaniel gives Rebecca his wedding present. He used his private jet and flew in her father Silas Bunch for the ceremony.

Retrieved from "https://cxg.fandom.com/wiki/Is_Josh_Free_in_Two_Weeks%3F?oldid=16102"
Community content is available under CC-BY-SA unless otherwise noted.