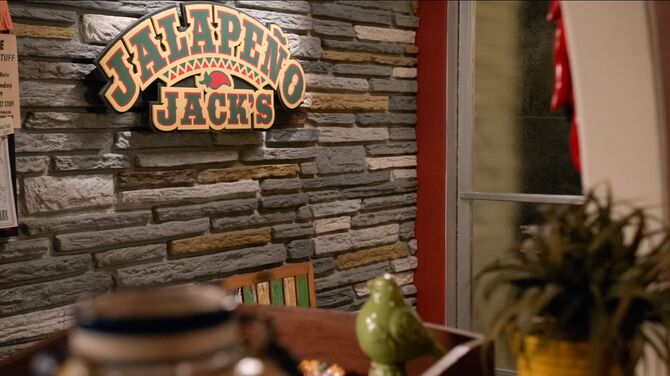 Jalapeño Jack's is a themed restaurant located in West Covina, California. Although it's name implied a Hispanic menu it featured a fusion of cuisines from various cultures. Paula Proctor orchestrated an elaborate scheme to set up a dinner for Rebecca Bunch with Josh Chan at the restaurant. The restaurant's first appearance was in the Season One Episode "Josh and I Work on a Case!".

After lying to Josh about a particular incident, Rebecca was on the outs with him. Inspired by the movie "Apollo 13", Paula thought up a complicated plan to make things better. Along with Mrs.Hernandez's help they set it in motion and the culmination of thier efforts had Rebecca "accidentally" meet Josh at an auto body shop on East Cameron. It was there she casually mentioned a Jalapeño Jack's coupon which Paula created that was supposedly for free drinks. As expected Josh took the bait and asked Rebecca if they could go together to the restaurant to use the coupon. That night Rebecca showed up first at Jalapeño Jack's and was confused by the cuisine she saw on the menu.

Despite this she went ahead and made a few orders until Josh got there and when he arrived they shared a large margarita. As they caught up with what's been going on since they last saw each other they were interrupted when Hector and a few of Josh's friends showed up unexpectedly. Along with Hector, White Josh was there and Chan introduced her to his other friends Ken and Beans. Rebecca was frustrated when her original plan was ruined as the date turned into a "Group Hang" (♫ Group Hang ♫). She was unable to get any closer to Josh as his friends repeatedly blocked her efforts. Once the dinner was over, the bill was presented and since nobody was willing to pay Rebecca volunteered.

She balked upon learning the grand total was nine hundred and seventy eight dollars. When Rebecca went to settle the tab a hostess placed a poncho, fake mustache and a sombrero on her. She was told that whenever a customer pays over six hundred dollars they put on a costume and have their picture taken for a wall which honored such patronage. As Rebecca waited for her picture to get taken she saw in the background Josh pull Hector aside. Rebecca eavesdropped and learned Josh had asked Hector to bring his friends because he still didn't trust her. As the truth sunk in the hostess and another employee returned with a camera and took her snapshot ("Josh and I Work on a Case!").