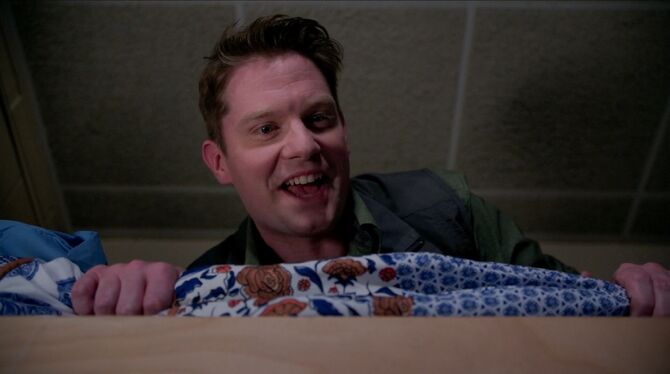 Jarl is a tourist from Denmark who visited West Covina, California and stayed at a youth hostel there during his travels. He became acquainted with a local attorney named Rebecca Bunch and they bonded over a mutual love of the revenge film “Swim Fan.” His first appearance was in the Season Three episode "Josh's Ex-Girlfriend is Crazy.” He is portrayed by actor/singer Rory O'Malley.

Jarl was visiting California having travelled all the way from his homeland of Denmark. As part of the budget tour of America he used hostels for to stay at overnight. In one such lodging in West Covina he met a local attorney named Rebecca Bunch who was also staying there. After talking with her he discovered they shared a mutual love of stalker films. In particular they both loved the film “Swimfan” which inspired Rebecca. Having been recently jilted by her fiancée she decided to get revenge on him using techniques inspired by the genre (♫ Scary Scary Sexy Lady ♫).

Later that evening, Jarl went to sleep as he needed the rest since he was going to the Gene Autry museum in the morning. His slumber was interrupted by Rebecca who returned to update him on her revenge plans. An excited Rebecca explained how she had successfully scared her ex-fiancée Josh. Jarl pointed out that she has reached the point in the stalker films narrative where she dies. He elaborated that in most films after a brief reign of terror the stalker will get caught and ultimately killed. Despite his prediction Rebecca refused to heed his warning and continued on with her plan ("Josh's Ex-Girlfriend is Crazy.")