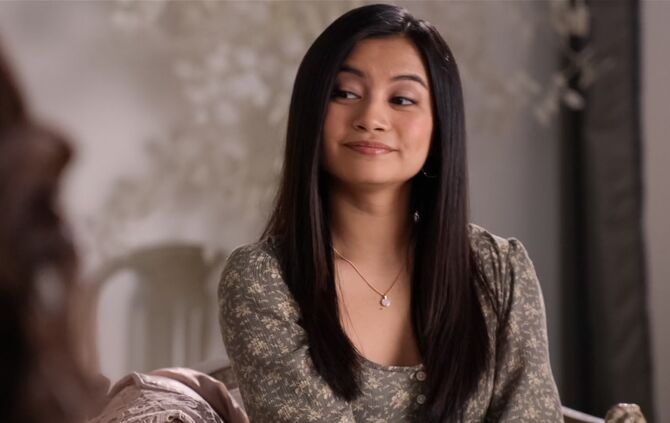 Jastinity Chan The sister of the object of Rebecca Bunch's affection

Jastinity Chan is a Filipino student living in West Covina, California. She is the youngest daughter of Lourdes and Joseph Chan and sister of Jayma and Josh. She is close to graduating and is set to attend Cal State Northridge. Her first appearance was in the Season One episode "My First Thanksgiving With Josh!". She is portrayed by actress Coryn Mabalot.

In November 2015, Jastinity Chan attended a huge Thanksgiving dinner with her family at her mother and father's house. Also there was her brother Josh's then girlfriend Valencia Perez and his ex-girlfriend Rebecca Bunch. Jastinity and her family were impressed with Rebecca's academic and professional achievements. At the same time they were dismissive of Valencia believing her to be shallow and superficial. The Chans included Rebecca in a family photo and invited her to attend church with them even though she's Jewish. After dinner, Josh made an announcement that he was he was moving in with Valencia. This disappointed Jastinity and the rest of the Chans who still disapproved of Valencia ("My First Thanksgiving with Josh!").

Months later, Jastinity was set to graduate from high school and applying to various colleges. She had asked Rebecca to write to Harvard University on her behalf but even with the recommendation her application wasn't good enough. Although she didn't make the Ivy League she did get into Cal State Northridge. Meanwhile her sister Jayma got engaged to her boyfriend Phillip. She accompanied Jayma and their mother to Rebecca's place for another favor. Jayma asked her to be a bridesmaid but Rebecca felt it wouldn't be right unless Josh's girlfriend Valencia wasn't. Jayma agreed and the next day Jastinity went with her, Ruby, and Rebecca to the bridal shop to look at dresses.

Jastinity was critical of Valencia who still hadn't arrived and suggested Josh's girlfriend just wanted to make a big entrance and was actually proven right. Valencia arrived wearing prop angel wings from a "Hometown Hotties" Maxim photo shoot she'd just completed. Later, Jastinity and Jayma were considering dresses in a slimmer style and were amused when Rebecca made self deprecating jokes about hid they'd fit her. Jastinity and her sister were surprised when Valencia had a good suggestion that they find thier own style of dress and use the same color. A few days later, Jastinity and the other bridesmaid were called back to the shop by Jayma. Her dress was finished early and the bridal party had an impromptu celebration. During the festivities Jastinity told her cousin Ruby she was the worst.

Afterwards, Jastinity left with her sister and Ruby to meet up with her mother for a wedding cake tasting. However, not long after they left Jayma got an alert about an Instagram picture Valencia uploaded. It showed her brother's girlfriend in Jayma's wedding dress with a hashtag reading "hotterthanthebride". Jastinity joined her sister, mother and cousin to confront Valencia at the bridal shop. A furious Jayma told Valencia she ruined her wedding and even got some surprising back up from Ruby. Jastinity and her family were shocked when Rebecca took responsibility for what happened claiming she did it of jealousy. Jastinity, Jayma, Lourdes and Ruby suddenly became sympathetic towards Valencia and finally welcomed her into the family ("Josh's Sister is Getting Married!").

Retrieved from "https://cxg.fandom.com/wiki/Jastinity_Chan?oldid=17636"
Community content is available under CC-BY-SA unless otherwise noted.