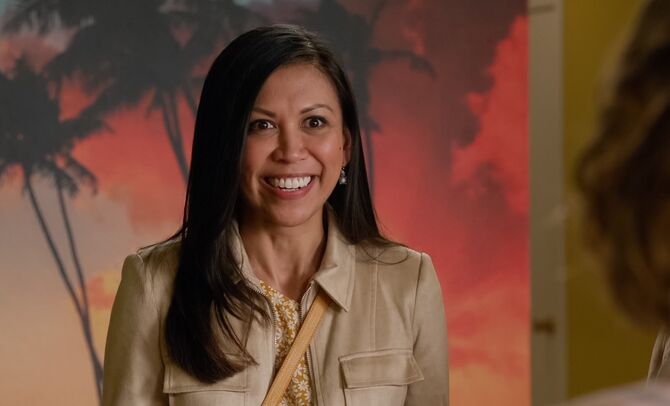 Jayma Epstein (née Chan) is a Filipino resident of West Covina, California. She is a part of the Chan family and the daughter of Lourdes and Joseph. Jayma is the oldest child and has two younger siblings; a sister named Jastinity and a brother Josh. After a seven year wait she was finally married to her longtime boyfriend Phillip Epstein. Her first appearance was in the Season One episode "My First Thanksgiving With Josh!". She is portrayed by actress Tess Paras.

In November 2015, Jayma Chan attended a huge Thanksgiving dinner with her immediate and extended family at her mother and father's house. Also in attendance at the event was her brother Josh's current girlfriend Valencia Perez and his ex-girlfriend Rebecca Bunch. Jayma and her family were charmed by Rebecca impressed with her academic and professional achievements. At the same time they were dismissive of Valencia believing her to be shallow and superficial. The Chan's liked Rebecca so much they included her in a family photo and also invited her to attend church with them even though she wa Jewish. After dinner was over, Josh made an announcement that he was he was moving in with Valencia. This disappointed Jayma and the rest of the Chan's who still disapproved of Valencia and now favored Rebecca ("My First Thanksgiving with Josh!").

Months later, Jayma finally got engaged to her boyfriend Phillip after seven years of waiting for him to propose. She got Rebecca to help Phillip pick out a ring and she even got him a discount on non-blood diamonds through a client of hers. Jayma went along with her mother and Jastinity to Rebecca's place for another favor. Even though she hadn't known Rebecca long, Jayma she asked her to be a bridesmaid. Rebecca was flattered but felt it wouldn't be right if she was in the wedding party and Josh's girlfriend Valencia wasn't. Since Josh was already pestering her about it and wanting to make Rebecca more comfortable in accepting Jayma reluctantly agreed to allow Valencia to be a bridesmaid as well. The next day Jayma, Jastinity, Ruby and Rebecca went to the bridal shop together to look at dresses.

Jayma asked if Rebecca was friends with Valencia since she had championed her getting a spot at the wedding. Rebecca replied they had similar interests at one point as Jastinity complained about Valencia being late. Jayma and the others were taken aback when Josh's girlfriend arrived wearing costume angel wings. She then asked her sister to help her pick out the first round of dresses. When Jayma returned with several gowns Valencia pointed out that a few of them might not fit Rebecca. Jayma agreed when Valencia suggested they instead try different styles in the same color. Sometime afterwards, Jayma texted her bridesmaids about an emergency at the bridal shop. When everyone arrived she revealed to them her wedding gown was finished early and she brought them all there to celebrate.

Afterwards, Jayma left with Ruby and Jastinity to meet up with her mother for a wedding cake tasting. She left Rebecca and Valencia to take care of the wedding dress and have it packed up and sent to her home. However, not long after she left Jayma got an alert about an Instagram picture Valencia uploaded. It showed her brother's girlfriend in her wedding dress with a hashtag reading "hotterthanthebride". Furious at the post she went back to the bridal shop with her mother, sister and cousin in tow. Jayma confronted Valencia declaring she ruined her wedding but she claimed her account was hacked. Jayma and her family were shocked when Rebecca took responsibility for what happened; she and the Chans became sympathetic towards Valencia and finally welcomed her into the family ("Josh's Sister is Getting Married!").

The day of Jama's wedding the ceremony went smoothly as her friends and family, including her Aunt Mryna, watched her marry Phillip. She and Phillip went on to the wedding reception which had an "Arabian Nights" theme. At the festivities they chatted with their guests, ate dinner and had thier first dance. Together they looked on as her brother Josh and a few others did a magic carpet dance with hover boards. The final performance of the night was Myrna who was singing the song "One Indescribable Instant" as wedding gift to her niece and her husband. Jayma was excited to have her Aunt sing and alerted all her guests Myrna was about to start. She would later learn that during the song someone drove off with the Cadillac Phillip and her were supposed to use to leave the reception ("Paula Needs to Get Over Josh!").

Retrieved from "https://cxg.fandom.com/wiki/Jayma_Epstein?oldid=17534"
Community content is available under CC-BY-SA unless otherwise noted.