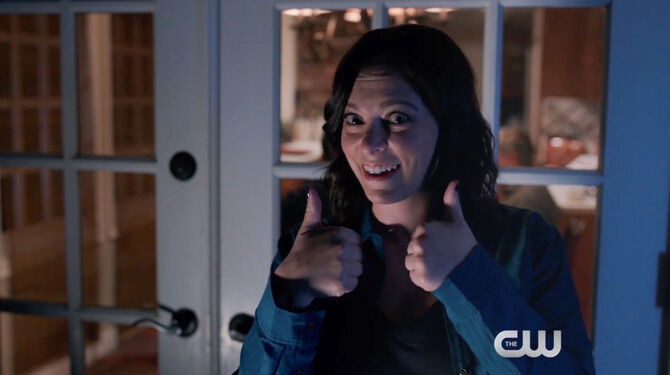 Rebecca and Nathaniel are stopped from leaving her house by Heather and the arrival of Paula, Valencia and Darryl. Thanks to a file Josh gave them her friends are aware of Rebecca being briefly institutionalized following a scandal years ago involving her ex-lover and Harvard professor Robert Donnelly. Rebecca is infuriated by the intervention and tells Valencia no one wants to marry her, calls Heather pathetic for staying in school until she was kicked out and points out to Darryl that WhiJo doesn’t want children. Rebecca then reveals the many crazy and illegal things Paula did to help her pursue Josh all while ignoring her own family. She then storms out and sends Josh a series of angry texts.

Back at the house her friends try to figure out what to do next. Nathaniel is unaware of the severity of the situation so Paula gives him the file to catch up. Some distance away, Rebecca is at a youth hostel and sharing a room with a Danish traveler named Jarl. They bond over a mutual love of the stalker film “Swim Fan” which inspires Rebecca to torment Josh (♫ Scary Scary Sexy Lady ♫). That night Rebecca heads to the Chan residence and startles Josh and family by making loud noises outside thier window. At the same time, her friends are canvassing the area to find her. As they search, Paula admits to Valencia she aided Rebecca in trying to sabotage her relationship with Josh.

Paula apologizes insisting they are all friends now and they need to find Rebecca before she hurts herself. Elsewhere, White Josh, Darryl and Hector are looking on another street. Darryl mentions what Rebecca said about WhiJo not wanting a child creating an awkward tension. Meanwhile, Nathaniel is at Rebecca’s place shocked by her file. He had George show up for moral support interrupting a date he was on. Back outside, Hector joins up with Heather for the search and an immediate attraction grows between them. Having had her fun terrorizing Josh, Rebecca goes back to the hostel. She updates Jarl on her progress but he warns her that in revenge films the villain always gets caught and dies.

Jarl adds that he believes her rage is less about Josh and more about the normal, happy life he represents which she never had. The following morning Heather returns to her house joined by Paula and Valencia. They are surprised to find Nathaniel still there along with George and his date. Paula and Heather both recognize the truth in Rebecca’s criticism of them and resolve to work on their personal issues. At the Aloha Tech Center, Josh thanks Alex for giving him his job back. However, due to an anonymous tip and incriminating evidence Alex is forced to suspend Josh pending an investigation into stolen merchandise. Josh then finds a note in his locker hinting that his mother was kidnapped.

Over at the annual carnival, Rebecca is hanging out with Josh’s mom and gets spotted by Paula who is there with her family. Josh shows up as well after his father told him where Rebecca and his mom went. He confronts Rebecca in front of a cordoned off pit and demands to know where his mother is. As they argue Rebecca loses her balance and almost falls into the hole until Josh pulls her to safety. Rebecca points out that Lourdes is safe but Josh is still furious. He tells Rebecca to stay away from him and his family or the next time he’ll call the police. That night Paula has a dream about Rebecca and worries that she’s in trouble. Paula calls Rebecca’s mother to tell her that her daughter needs her help.

A despondent Rebecca finds her way to a bar her ex-boyfriend Greg used to frequent. She is elated to receive a phone call from Greg seeing it as a sign only to be saddened after finding out he accidentally dialed her. Coincidentally Greg’s father Marco is at the bar and Rebecca learns his son is doing well and has fallen in love. Sinking further into depression, Rebecca ends up going back to Marco’s place and having sex with him. After sneaking out she, along with her friends across town, contemplate the future; this includes WhiJo who admits to Darryl he doesn’t want children (♫ The End of The Movie ♫). Rebecca returns to the hostel where she receives a phone call from her mother and agrees to come home.