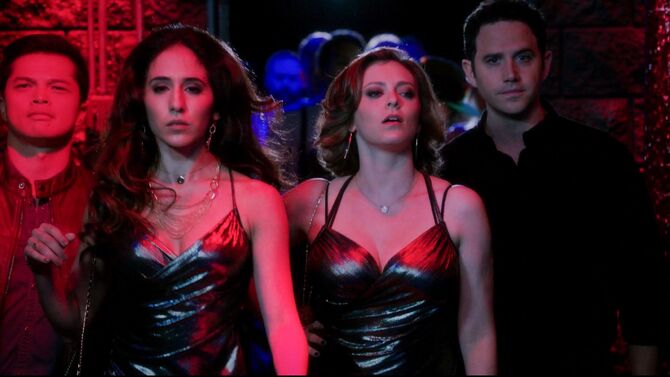 As they arrive at Whitefeather & Associates Rebecca discusses with Paula why Josh Chan has yet to follow up on the dinner invite he sent to her. Paula uses Rebbeca's phone which is keyed in to Josh's social media updates to find a clue. According to his last post Josh and his friends intend on going to a local club called "Spider's" later that evening. They decide to go too but when they show up that night are unable to convince the bouncer to let them inside. Rebecca passes on Paula's offer to stay out preferring to head home for some alone time. She finds she is unable to enjoy herself and decides to go to the grocery store to pick up some more aspirin. Its there that she spots Josh and his girlfriend Valencia canoodling in the frozen food section.

A grocery clerk notices her staring and Rebecca explains she's watching her ex-boyfriend make out with the hottest girl she's ever seen. She turns to leave only to crash right into Greg Serrano. Rebecca tries to excuse herself but her exit is interrupted by Greg's friends White Josh and Hector showing up. She leaves the trio behind only to be spotted by Josh who fails to prevent Valencia from seeing her. Josh introduces Rebecca as a friend he met at summer camp when they were only eight years old. Rebecca goes along with the lie and tries to ingratiate herself to Valencia. She invites Rebecca to a yoga class she is instructing the next day. When Rebecca walks off Josh catches up to her and apologizes for lying. He insists that it would be for the best if she and Valencia don't become friends but Rebecca ignores him.

At home she sends a friend request to Valencia's Facebook page and gets accepted. The next day at the law firm, Paula gives Rebecca a few things including a Statue of Liberty keychain. She suggests Rebecca is trying to become friends with Valencia to undermine her relationship with Josh. Rebecca dismisses the idea and goes to attend a yoga class Valencia is teaching where is awed by her beauty and physical fitness (♫ I'm So Good At Yoga ♫). After class Rebecca offers to help Valencia find a place for her own studio. She invites her to lunch to discuss the matter further. Josh is worried about thus and meets with Rebecca at Cup of boba who assures him not to worry about the situation. After her lunch with Valencia Rebecca becomes more infatuated with Josh's girlfriend. At Home Base, Josh finds out Greg is into Rebecca and encourages him to pursue her.

Over at Rebecca's apartment, she and Valencia are enjoying a bottle of wine. Valencia confesses she has a hard time making female friends but she feels a real bond growing with Rebecca. The following morning at the law firm, Paula expresses annoyance when Rebecca gushes about her new friendship. They get into an argument which is overheard by her client Mendez in the conference room. Darryl alerts Rebecca to this who apologizes only to act inappropriately again. She gets excited after receiving a text from Valencia inviting her to go to Club Spider's tonight. Mendez is about to leave when Rebecca tells them she got the arbitration meeting they wanted. Paula is saddened when Rebecca eagerly leaves the meeting to prepare for her date with Valencia.

That night at the club, Rebecca has no problem getting in this time as she and Valencia enter easily escorted by Josh and Greg. At the law firm, Paula is working late and her phone receives a notification of a selfie Rebecca just uploaded with Valencia. Back at Spider's, Josh and Greg are put off by Rebecca and Valencia's public displays of affection. When Valencia asks Rebecca and Greg to join her and Josh on the dance floor they run into the grocery clerk from the night before. To Rebecca's horror he accidentally reveals to Greg that Josh was once her ex-boyfriend. She pleads with Greg not to tell anyone before going to dance with Valencia (♫ Feelin' Kinda Naughty ♫). While doing this, Rebecca downs multiple shots and in a drunken haze kisses Valencia.

Valencia pushes her away and goes to a table where Rebecca follows joined by both Greg and Josh. As she tries to explain herself, Rebecca inadvertently tells Valencia thar she and Josh dated. Feeling betrayed, Valencia is furious and warns Rebecca to stay away from them. She and Josh leave the club as does Rebecca who refuses Greg's attempts to console her. The next day at the office Rebecca apologizes to Paula for her behavior. After a successful hearing, Rebecca is surprised when Josh shows up at the office. He apologizes for making her lie to Valencia and invites her to dinner to make up for it. That night at a restaurant a fair distance away, Josh tells Rebecca that Valencia forbade him from seeing her. Rebecca jokes about this only to inwardly resolve to overcome this obstacle.

Retrieved from "https://cxg.fandom.com/wiki/Josh%27s_Girlfriend_is_Really_Cool!?oldid=18497"
Community content is available under CC-BY-SA unless otherwise noted.