Josh's Sister is Getting Married! 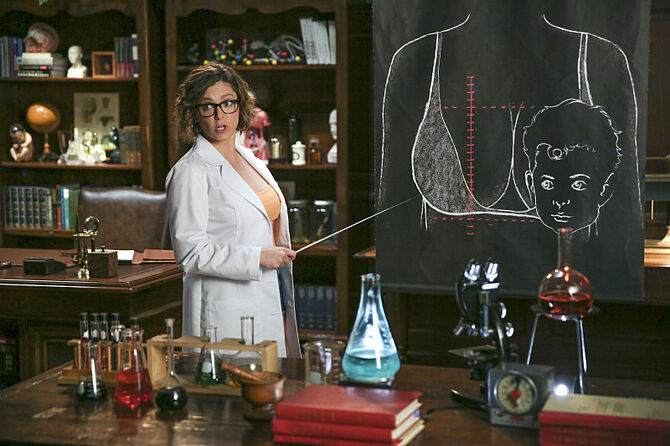 Josh's Sister is Getting Married!

In her apartment, Josh confronts Rebecca about a packet of photos she has of him. Rebecca finally owns up to her feelings but insists she is moving past that obsession. She trying to make healthier choices now and avoiding the same destructive patterns she's been repeating. Rebecca is also adamant on making things right with Valencia but Josh advises her against it before he leaves. That night Rebecca ran into Greg at a bar where he was studying for a test. She learns he broke up with Heather and leaves not wanting to be around Greg's surly attitude. The next morning at her apartment, Rebecca decides to toss out various Josh related items much to Paula's horror.

At Greg's business school his teacher reprimands him for his lackadaisical efforts and suggests he made up his mind not to try. Greg ignores her critique believing he could have done better but just didn't feel like it (♫ I Could If I Wanted To ♫). Back at Rebecca's apartment, Paula continues to be upset at seeing her friend dispose of Josh related items like Channy Bear. They are interrupted when Mrs.Chan and her daughter's Jayma and Jastinity show up. They wanted to know if Rebecca would be a bridesmaid at Jayma's upcoming wedding. When Rebecca points out Valencia is not in the wedding party Jayma decides they can both be bridesmaids. Over at the grocery store, Greg bumps into a grocery clerk he met months ago at Spider's named Marty.

He learns Marty is in love with a co-worker named Ally who herself is smitten with another employee named Brody. Greg offers to lend his expertise on unrequited love to Marty. Meanwhile, Rebecca joins Jayma, Jastinity and their cousin Ruby at the bridal shop. Rebecca tries to defend Valencia after the Chan's criticize her which is made difficult when she arrives late. Privately, Valencia tells Rebecca she knows about the kiss with Josh but because she got her into the wedding party she'll let it slide for now. Rebecca promises Valencia she will make her look good in front of the Chan's. As everyone looks at dresses, Rebecca builds up Valencia to the Chans who start to warm up to Josh's girlfriend and listen to her suggestions.

After returning to the law firm, Rebecca nixes Paula's ideas to sabotage Valencia insisting she is genuinely trying to make amends. Over at Country Market, Greg has Marty publicly serenade Ally on the sales floor with a song (♫ Clean Up on Aisle Four ♫). It seems to work until Brody upstages Marty by doing cartwheels which wins Ally's approval. At the law firm, Rebecca tells Paula to stop scheming which her friend interprets is just the usual denials. Rebecca receives an emergency text and joins the bridal party at the wedding shop where Jayma announces her dress is finished early. After an impromptu party, Jayma and the others leave giving Valencia and Rebecca the responsibility of packing up the dress.

When Valencia tells her she's jealous of her bust size Rebecca demonstrates the cons of having large breasts. She puts on Jayma's wedding gown which is too small for her chest (♫ Heavy Boobs ♫). Rebecca gets Valencia to try on the dress as well. At Valencia's request (and using her phone) Rebecca snaps a picture of her in the gown. Meanwhile, Paula hacks into Valencia's online accounts and posts the latest photo on Instagram. Jayma sees this, along with the insulting hashtag Paula added, and the Chan women go to the bridal shop to confront Valencia. She claims her account was hacked and blames Rebecca who realizes Paula's involvement and accepts the blame. She is removed from the bridal party and the Chans apologize to Valencia who is finally accepted her into their family.

Rebecca goes to the law firm and confronts Paula over her actions. Paula points out what she did is no different than the other schemes Rebecca tacitly approved of. Rebecca realizes she is right but tells her from now on it ends. When Paula refuses Rebecca gets her to confess she worries thier friendship won't survive without them chasing Josh. Rebecca tells Paula assures they will always be friends but insists that this mutual unhealthy obsession needs to stop. Meanwhile, Greg talks to Ally about to Marty and she explains she's told him several times she's not interested but he refuses to listen. Later, Greg commiserates with Marty and suggests he let his unrequited love go and resolves to do the same in his own life.

That night at Home Base, Rebecca walks in and banters with Greg. When she asks him if he wants to go out later he declines refusing to be her second choice. Rebecca goes back to her apartment where Josh unexpectedly shows up angry over the situation with Valencia. Rebecca tells him that things turned out for the best and to just focus on his family and girlfriend. Much to her and Josh's surprise she kicks him out and goes back to Home Base. Rebecca kisses Greg and assures him this time he is not second choice. Greg tells her if this is happening she needs to prepare herself for a marathon of sex. After Rebecca agrees they resume making out as Greg carries her off to continue this in the back room of the bar.