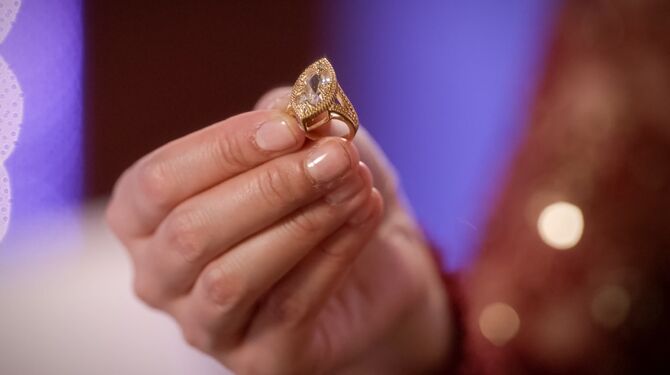 Josh's grandmother's ring is a Chan family heirloom which had long been in the possession of Tita Myrna. She bestowed it to Josh in the hopes it would incentivize him to finally propose to his girlfriend of fifteen years Valencia Perez. However, it had the opposite effect and became part of the reason why things ended badly between Valencia and Josh. The ring was first seen in the Season One episode "Paula Needs to Get Over Josh!".

In April 2016, Josh's sister Jayma finally got married to Phillip Epstein her boyfriend for the last seven years. While at the wedding reception, Josh contemplated his own future with Valencia while he also struggled with his confusing feelings for his ex-girlfriend Rebecca Bunch. His Aunt Myrna sensed his conflict and talked to him about it. Myrna told him she could help him with his problem and presented to him a family heirloom. It was Josh's grandmother's ring and Myrna believed it would look perfect on Valencia whenever he was ready to propose. Josh was appreciative of the gesture until he saw Myrna exchange a glance with Valencia. He realized he was being manipulated and asked Myrna if Valencia put her up to this.

Josh confronted his girlfriend about what she did and Valencia explained she knew Myrna had the ring and wanted to get it before Josh's cousin Ruby did. Josh was angry that Valencia couldn't trust him to get an engagement ring himself as he had told her earlier he was going to shop for one but needed a little time. Valencia was just as upset pointing out that for fifteen years she had patiently waited for him. She got his grandmothers ring because a part of her believed he would never propose. Valencia at first pleaded and then demanded they get engaged immediately. Josh refused feeling that this was yet another example of her not listening to him. Valencia then told Josh she'd had enough of his indecisiveness and broke up with him ("Paula Needs to Get Over Josh!").