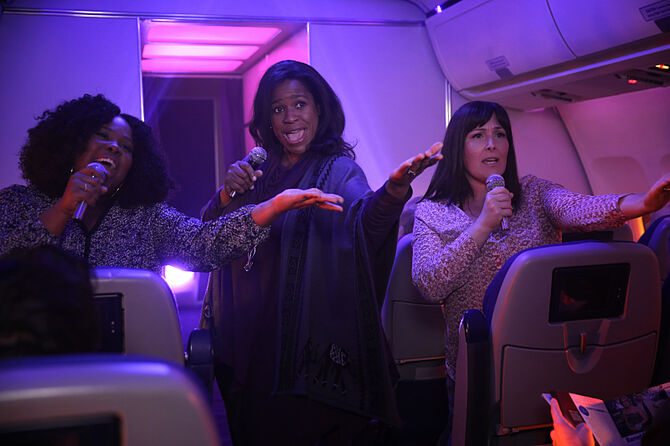 Josh Has No Idea Where I Am!

In Rebecca's apartment, Paula is with Mrs.Hernandez and has Rebecca's sofa moved back in after she had bought it back. She then decides to take the rest of the day off much to Mrs.Hernadez's disapproval. Meanwhile, Rebecca starts her impromptu therapy session with Dr.Akopian and recounts why she moved to West Covina, California (♫ Crazy Ex-Girlfriend Theme Song ♫). Believing her life to be loveless, she is headed back to New York City and her former employer Sampson & Saunders. Rebecca then realizes she is asleep; her conversation with Akopian is actually taking place in a dream she is having after downing some sleeping pills. Akopian is her "Dream Ghost", an apparition guiding her to making the right choices (♫ Dream Ghost ♫).

Dream Ghost Akopian shows a moment from Rebecca's past when as a 13-year-old she visited her father Silas Bunch after he divorced her mom and moved to Santa Fe, California. Akopian noticed this was not the first time she chased after a man she loved to the west coast. Rebecca said this was a different situation since her mother Naomi was keeping them apart. As the memory continued she saw that wasn't the case as Naomi was actually trying to get Silas to spend more time with her but he refused. Rebecca is stunned by the revelation and Akopian points out she was loved in this situation just not by her father. Dream Ghost Akopian is annoyed when Rebecca doesn't see the memory as proof of her being loved just evidence that her father was worse than she thought.

Back in West Covina, Josh shows up at Rebecca's apartment and finds Paula relaxing there. After Paula grills Josh she puts together what happened and realizes Rebecca found out he was staying with Valencia. Darryl interrupts them as he's looking for Rebecca as well and they all begin to wonder where she is. On the plane, Rebecca's dream with the imaginary Akopian continues and she is shown a flashback from her sophomore year at Harvard University. Back then Rebecca was cast in a musical and sleeping with Warren the director. When she found out he was also having sex with other cast members she decided to drop out of the production. Dream Ghost Akopian explained that another love in her life she's been ignoring is her love of musical theater.

Rebecca explains that music comforts her and she imagines her life as a series of musical numbers. Dream Ghost Akopian suggests it's not that Rebecca doesn't have love in her life it's that she doesn't recognize it when it's there. In West Covina, Greg goes to Rebecca's apartment after getting an emergency text from Darryl. Paula fills him in on the situation but he's unconvinced it's that serious due to Rebecca's history of erratic behavior. This doesn't allay Paula's concerns and she looks in Rebecca's laptop to find answers. After going through deleted emails she discovers Rebecca is planning on returning to New York and has already recieved a job offer. Everyone but Greg still doesn't panics believing Rebecca is leaving for good.

In Rebecca's dream she argues with Akopian that putting aside her mother's love and her love for music she doesn't have romantic love. Akopian replies that she does have several people who love her in thier own ways. She takes Rebecca to her apartment and shows her friends are worried about her. Rebecca overhears them discussing how she's helped changed thier lives for the better. Akopian shows her how this starkly contrasts Audra Levine and her New York co-workers reaction when she left. Rebecca notices Greg seems uncaring until Akopian tells her to look at his phone. It turns out he was checking local hospitals and even morgues to see if she had turned up there. Rebecca finally understands that she's been so busy chasing after Josh she's lost sight of any potential love anywhere else.

Upon imparting this wisdom, Dream Ghost Akopian tells Rebecca to wake up which she immediately does. She thanks the real Akopian sitting next to her on the plane who is confused and suggests they have more sessions a week. Rebecca makes it back to her apartment ten hours later after getting on another plane ride. She finds her friends there and thanks everyone, particularly Greg, for worrying about her. Once they all welcome her back individually she finds herself alone with Josh who had just seen a packet of Rebecca's photos featuring himself. Paula had shown it to him earlier to demonstrate how Rebecca feels about him and hoped he would use his influence to prevent her from moving. Josh confronts Rebecca about this and asks her if she's in love with him.

Retrieved from "https://cxg.fandom.com/wiki/Josh_Has_No_Idea_Where_I_Am!?oldid=18559"
Community content is available under CC-BY-SA unless otherwise noted.