Josh Is a Liar. 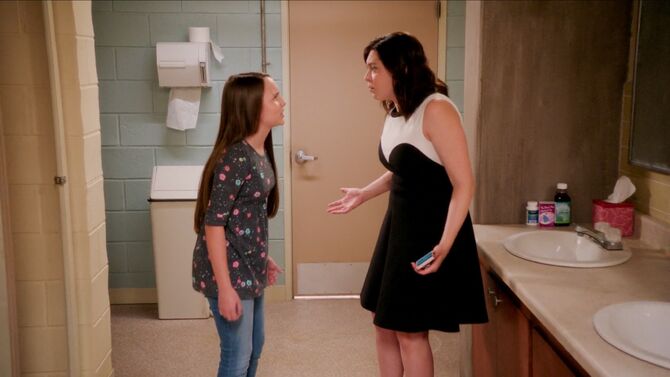 Josh Is a Liar.

Rebecca is at home panicking after having told Josh everything she did since moving to West Covina. Her anxiety manifests itself in the form of her pre-teen self. She warns older Rebecca that Josh will tell everyone what he knows and she will become a social pariah. At work, Rebecca ignores a smitten Nathaniel and finds Paula who has some news. She set up an interview with an online feminist blog “The Corset” to discuss the lawsuit against Josh. Fearing retaliation from Josh, Rebecca convinces Paula her legal arguments aren’t strong enough and insists they drop the lawsuit. Meanwhile at community college, Heather is called into her Dean’s office and told it’s time for her to finally graduate.

Back at the law firm, George offers advice to Nathaniel as he is someone experienced with rejection. He suggests his boss needs to regain the power back in his relationship with Rebecca by playing it cool. In the office bullpen, Young Rebecca warns her older self about a social media announcement Josh is making. He’s quitting the priesthood and plans on giving more details about his reasons when he returns home. Rebecca decides to ruin Josh's reputation so that anything he might say about her won’t be believed. She tells Paula the lawsuit is back on and agrees to do the interview. At the same time, Heather struggles with her impending graduation as she’s unsure of her future (♫ The Moment Is Me ♫).

Across town, Rebecca and Paula meet with the reporter but the focus of the interview becomes a smear campaign against Josh. Rebecca gives a file to the reporter listing false examples of Josh's horrible behavior. Paula is confused by the revelations and her friend’s odd behavior. At Rebecca’s home, she waits for the story to be posted online as Heather talks about her own problems. Rebecca suggests she fail her last class, Marine Biology, so Heather has to retake it allowing her to stay in school. Heather is hesitant as it would mean killing her pet starfish Estrella who is a part of her last assignment. When the anti-Josh story drops Rebecca gets Heather to forward the article to everyone she knows.

At the law firm, Paula is suspicious as to why Rebecca is trying hard to disseminate the information in the article. On George's advice Nathaniel demands Rebecca have dinner with him later which she reluctantly agrees to. Over at Home Base, Josh gets a hostile homecoming from WhiJo, Hector, Chris and Kevin. They show him the article as Rebecca watches her scheme unfold from the back room. No one believes Josh when he denies the accusations and tries to tell everyone the truth about Rebecca. At work, Paula tells Rebecca she is a role model for speaking out against Josh. Meanwhile, Josh finds the file on Rebecca which Trent Maddock gave him before the wedding.

At Nathaniel’s apartment, he is stood up by Rebecca for their date and goes to his favorite place in order to brighten his mood (♫ I Go To The Zoo ♫). Meanwhile, Josh goes to Our Lady of West Covina and shows Rebecca’s file to Father Brah. The next morning at Rebecca’s house she embraces her new role model persona while Heather accepts that she must finally graduate. At the firm, Nathaniel is still in a funk and George suggests he just admit his feelings to Rebecca. Over in the bullpen, Rebecca learns Paula was called to a meeting with Father Brah which is about her. She rushes to the church and arrives just in time to clandestinely observe Paula, Josh and Brah discussing her scandal with Robert.

Rebecca goes home and argues with her younger self who suggests that she relocate before getting ostracized or worse institutionalized again. She is interrupted by Nathaniel who shows up on her doorstep to confess his feelings for her. When she tells him she needs to leave town he offers to fly her anywhere in his private jet. Rebecca accepts his offer and in a romantic gesture Nathaniel carries her out of her room. As they approach the front door they are stopped by Heather who just got a call from Paula. Rebecca tries to get Nathaniel to move past her when Paula arrives carrying Rebecca’s file. She is followed by Valencia and Darryl as Paula declares to Rebecca that they need to have a talk.