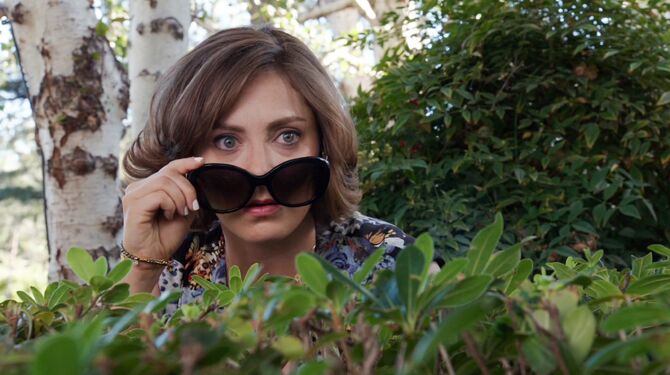 Josh and I Are Good People!

Rebecca drives her car to the park where she meets with Josh at Cup of boba. She shows off a photo album she has of their time together at camp. They are interrupted by Greg's arrival at the shop who is still upset about his horrible date with Rebecca. Unaware of what transpired, Josh defends Rebecca's honor when Greg insults her. Greg turns his vitriol on Josh noting he's sneaking off to meet Rebecca even though Valencia wouldn't like it. He calls them both terrible people before leaving. Rebecca resolves to prove Greg wrong and starts by giving a homeless lady named Joyce a ride in her car. At Whitefeather & Associates, Paula is annoyed by her co-workers Tim and Jim's shenanigans. Rebecca shows up with coffee and donuts for everyone and even contributes to Karen's fund for her sick snake.

Rebecca tells Paula how upset she is that Greg believes she's a bad person. She decides to represent Darryl against his ex-wife Stacy in a custody case involving their daughter Madison. While she and Darryl work on the case Paula is put in charge of the law firm. Meanwhile, Josh went to church for confessional as Greg's criticisms weighed heavily on his mind. His old friend Father Brah was manning the booth and after reconnecting moved the conversation outside. While playing basketball outside Brah suggests to Josh he make a list of all the sinful thoughts he had for one day. Over at Home Base, Rebecca brings Darryl there to work on the case hoping Greg he will see her. Instead a bartender tells her Greg left not long after she arrived and that he put up a dart board in the back room with Rebecca's face on it.

Her true purpose gone, Rebecca tells Darryl the custody arrangements seems unchangable and leaves. Darryl chases after her and tries to explain how much his daughter means to him to inspire her to find a solution (♫ I Love My Daughter ♫). Back at the office, Paula establishes a draconian rule over the office. When she goes through old documents in Darryl's office she discovers Tim is a Canadian expatriate in the country illegally. At Darryl's apartment, Rebecca interviews Madison and learns her mother would leave her alone at home to have sex with her boss. Rebecca calls an emergency hearing with the judge to present this evidence. The judge awards Darryl temporary full custody of Madison and Rebecca goes to Home Base to gloat about her good deed to Greg (♫ I'm a Good Person ♫).

Greg is unimpressed with her efforts and even rejects her offer of sex to make up for their bad date. Thinking she needs to go further to prove she is a good person she decides to get Darryl permanent full custody. At the church, Josh brings the list Brah asked him to make. Brah noticed Rebecca appeared on it several times but assured Josh as long as he didn't act on his feelings he was fine. The real problem was how he was going to deal with his attraction to Rebecca now that he owned up to it. Meanwhile, Rebecca is at Stacy's house covertly watching as she puts her bags in a car for a trip. She was planning to frame Stacy for a crime but gets caught during the process. Rebecca blamed her actions on her own parents bitter divorce and they agree to settle the custody dispute amicably.

They went to Home Base to tell Darryl and Madison which Greg observed. He talked to Rebecca afterwards and she sincerely apologized for thier date. Greg replied that he was still unsure about her but conceded she did a good thing for Darryl. At the law firm, Paula told Tim she wouldn't rat him out because she couldn't break up his family. Later, Mrs.Hernandez told Paula that she was a good person (♫ I'm a Good Person (silent reprise) ♫). At Cup of boba, Josh met up with Rebecca and told her that while he is very attracted to her he is committed to Valencia. He insisted that their relationship remain platonic but Rebecca was barely paying attention replaying his previous comment. Afterwards she finds Joyce the homeless person and the two celebrate over Rebecca's latest progress with Josh.

Retrieved from "https://cxg.fandom.com/wiki/Josh_and_I_Are_Good_People!?oldid=16104"
Community content is available under CC-BY-SA unless otherwise noted.