Josh and I Go to Los Angeles! 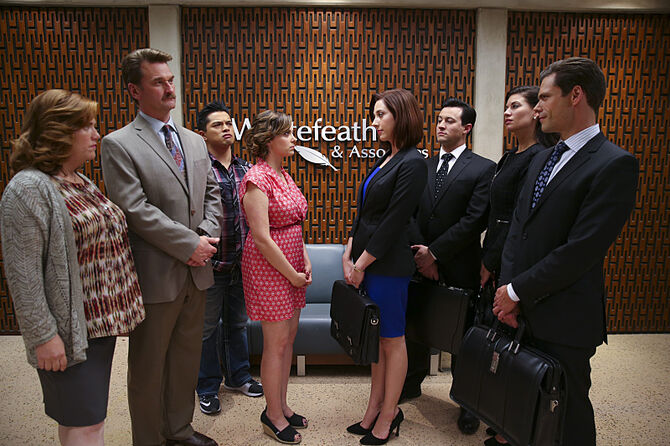 Josh and I Go to Los Angeles!

In Josh and Valencia's apartment, Rebecca has an audience as she passionately kisses Trent. Rebecca's supposed boyfriend covers for her lies and convinces everyone they are a legit couple before leaving. Without missing a beat, Rebecca tells Josh their case involves a company called Greater City Water and now includes all of the San Gabriel Valley. She asks him to meet her back at the law firm so they can strategize. When she leaves, a stunned Greg follows but not before declaring he and everyone else needs to stop obsessing over Rebecca. A contrite Valencia apologizes to Josh who simply asks her to trust him. Elsewhere, Darryl goes back to see White Josh at the gym and asks him out. Josh declines because Darryl only wants to go somewhere no one knows them.

At the law firm, Rebecca details how Greater City Water's been stealing water from local areas and diverting it to Los Angeles. Darryl suggests they acquire more plaintiffs to join Josh in a class action lawsuit. Afterwards, Rebecca finds Trent in her home and he threatens to expose the truth unless they have dinner together. The next day, Paula is concerned when she learns that additionally Trent also blackmailed her into staying the night. They join Josh and Darryl in recruiting more plaintiffs but are interrupted by representatives from Greater City Water. Rebecca recognizes them as lawyers from her New York law firm led by Audra Levine her old rival. Audra tells Rebecca there won't be any settlement offer and advises she drop the lawsuit (♫ JAP Battle ♫).

At Home Base, Heather is hired by Kevin who is impressed with her personality and honesty. Meanwhile, Rebecca heads to her apartment where Trent welcomes her with a dinner he prepared. Rebecca tells Trent that despite all the evidence she gathered she wishes there was some irrefutable proof. To thank him for listening she allows Trent to sleep at the foot of her bed. The next day at the Los Angeles County Court building, Paula is still concerned about Trent but Rebecca's only worry is if any of their clients will show up. After both Josh Chan and Josh Wilson arrive a crowd of people from around San Gabriel Valley also appear (♫ Flooded with Justice ♫). Over at Home Base, Heather tunes the bar's TV to a local public access channel showing Rebecca's trial live.

Kevin and all the patrons insist on watching the trial much to Greg's annoyance. Rebecca is shown calling her first witness Josh Chan to confirm he was the one to alert her to the cold shower epidemic. A number of other San Gabriel plaintiffs give thier testimony until Rebecca calls her star witness Bert. He identifies himself as a former Greater City Water employee who conducted an independent research that definitively concluded that his former employer was stealing water. Audra is called to cross examine him and destroys his credibility when she brings up he has been suffering from schizophrenia for sixteen years. Rebecca asks for a recess and when the court clears she and Paula try to figure out her next move.

Trent interrupts and surprises Rebecca with definitive proof of Greater City Water's guilt. It's pages of emails he hacked from the company's computer that details thier criminal activities. Paula pleads with Rebecca not to use illegally obtained evidence since it could get her disbarred. When the court reconvenes, Rebecca is called by the judge to continue her case and struggles with whether or not to submit the emails as evidence. She looks at Audra and recalls a moment when they were kids blindly competing against each other. It inspires her to not take the easy way out and she decides to just deliver her closing arguments. She details her devotion to her new hometown and asks the court to consider the overwhelming evidence instead of the credibility of it's source.

At Home Base, Heather watches Greg's reaction to the speech and realizes he's in love with Rebecca. She immediately breaks up with him and also encourages Greg to go see Rebecca (♫ Don't Settle For Me ♫). Back in court, the judge praises Rebecca's speech but rules in Greater City Water's favor. Rebecca apologizes to all the plaintiffs for failing them but instead of being angry they applaud her efforts (♫ Flooded with Justice (reprise) ♫). As everyone clears the courtroom, Rebecca graciously admits her defeat to Audra. She confuses her rival when she tells Audra to make sure she lets herself be happy. Outside, Darryl catches up to White Josh and apologizes. Darryl publicly declares his romantic intentions towards White Josh and they leave together to have a drink.

Back in the courtroom, Rebecca is aproached by a reporter who tells her she may have exposed the city's biggest scandal in years. Rebecca gives the reporter Trent's emails to help him further break the story. After he left, Josh attempts to cheer Rebecca up telling her how proud he is of how she stood up for her new hometown. He was flattered when Rebecca reveals he was the person she didn't want to dissapoint the most in this case. Overcome with emotion Josh kisses Rebecca as an eavesdropping Paula watches on. Greg arrives just in time to witness the kiss as well and Paula offered her sympathies. He walks away after Paula tells him he's a nice guy but Rebecca and Josh were meant to be together.

In a Vulture TV Podcast, Rachel Bloom and Aline Brosh McKenna discussed the scene where Josh and Rebecca kissed. Bloom was sick at the time and Vincent Rodriguez III didn't want to catch what she had so he took someone's advice and ate a lot of raw garlic before they started shooting. He was reeking of garlic during the scene which made filming it uncomfortable for Bloom.