Josh and I Work on a Case! 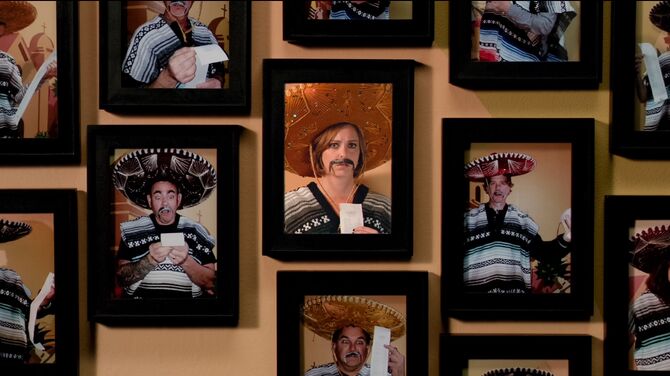 Josh and I Work on a Case!

At Whitefeather & Associates, Rebecca is depressed that Josh is continuing to keep his distance from her after he discovered she had lied to him. Paula explains a new scheme she has put into play to get Rebecca back into Josh's good graces. She manipulated a series of events which led to a supposedly chance encounter between Rebecca and Josh at an auto body shop. Per Paula's instructions, Rebecca mentioned a supposed boyfriend she has called Trent to put Josh at ease. She then "accidentally" showed off a fake coupon for free drinks at a local restaurant called Jalapeño Jack's. As Paula expected Josh took the bait and agreed to go to the restaurant with Rebecca before the coupon expired.

The night went well until Josh's friends Hector, White Josh, Ken and Beans show up. The intimate date turns into a group hang resulting in an expensive bill (♫ Group Hang ♫). As she pays for the dinner she eavesdrops on Josh who is with Hector and learns he invited his friends as a buffer. The next day at work Rebecca consulted Mrs.Hernandez and Paula about about what to try next. Inspiration hit when they hear Tim complaining about spending too much time with a client. Rebecca recalls a potential lawsuit for Josh involving hot water problems he has at his apartment. Meanwhile, Darryl is at the 24 Hour Gym with White Josh who is supervising his work out. Darryl leaves after learning White Josh is gay and believes they share the same orientation.

Rebecca invites both Valencia and Josh to the law firm to discuss grounds for a case against the apartment owners. She entices them to proceed by promising a hefty settlement. Although interested in the money Valencia's distrust of Rebecca's true motives makes her insist Josh turn down the offer. Later at Home Base, Josh discusses the potential lawsuit with Chris who in turn informs Greg. He believes it to be a ruse for some scheme but Josh argues her interest is strictly professional now that she has a new boyfriend named Trent. Back at the firm, Rebecca is shocked to find a legitimate angle to the lawsuit.

The next day Rebecca heads to Josh's apartment complex with Paula and Darryl. Valencia answers the door and reveals Greg is there too as they have formed an alliance to stop her plans. Josh, White Josh and Hector then show up having just returned from a run and are surprised to see everybody. When everyone talks to Josh all at once Paula silences the crowd with a loud whistle. This allows Rebecca to explain to Josh she had new information which she guarantees can win him and his neighbors a huge settlement. However, Josh refuses to listen and he and his friends join Valencia and Greg inside of the apartment closing the door behind them.

Rebecca is undeterred and she Paula and Darryl canvass the entire apartment complex getting Josh's neighbors to join in on the class action law suit (♫ Cold Showers Leads to Crack ♫). When they return to Josh's apartment with a bunch of signatures he is finally convinced to sign on. The next day Josh is at the law firm having lunch and discussing the case with Rebecca. The meeting is interrupted by a call from the plaintiff who agrees to settle the case for a million dollars. Although everyone is eager to accept the money Rebecca is unwilling to end her time with Josh so soon. Sensing the building owner is giving up too easily she decided to investigate the matter further with Darryl.

Meanwhile, Valencia and Greg have a secret meeting to expose Rebecca as a fraud. Elsewhere, Rebecca contacts an ex-utilty worker called Bert who has a theory about the cold shower epidemic. In the sewers, he shows Rebecca and Darryl pipes that are illegally siphoning off water to Los Angeles. This has affected the area's water heaters leading to cold showers. The demonstration causes Darryl to have an epiphany; he runs to the gym to tell White Josh he is "both-sexual" and kisses him. At the same time, Rebecca goes to Josh's apartment to tell him the latest news only to find her fake boyfriend Trent there. Greg, Valencia and Josh watch on in astonishment as Rebecca passionately kisses Trent.