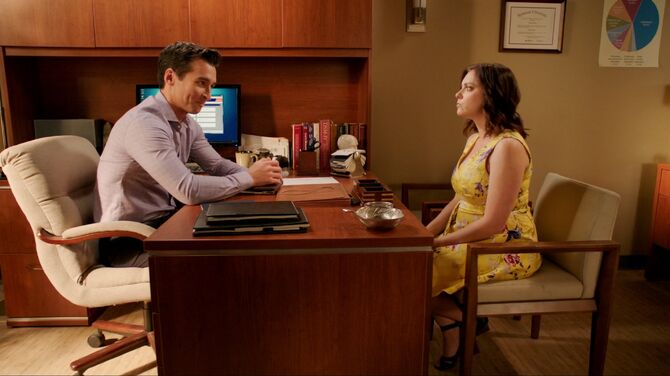 Rebecca is recovering at Glenn Willow Medical Center after attempting suicide on her flight back from Scarsdale. In the waiting room, Valencia and Heather are updated by Paula on Rebecca’s now stable condition. Paula asks that they pass the news along to everyone in Rebecca's social circle. When Josh shows up the three women tell him to leave. In Rebecca’s hospital room, Dr. Akopian tells her patient she did the right thing by asking for help. She plans to work alongside the hospital psychiatrist to get Rebecca the treatment she needs. At the Whitefeather & Associates, Nathaniel is briefly interrupted by George as he struggles to write a message on a card he’s sending Rebecca.

Back at the hospital, Valencia posts updates on social media about Rebecca and criticizes Heather when she shows up with her new boyfriend Hector. Before bieng discharged from the hospital, Rebecca is visited by staff psychiatrist Dr. Daniel Shin. He believes she’s been misdiagnosed for years and is researching her case for a new take on it. The next day Rebecca goes to Dr. Shin’s office eager to learn what his diagnosis will be (♫ A Diagnosis ♫). Shin cautions her not to look anything up online before he can fully explain. Although she exhibits a number of different symptoms he believes she has borderline personality disorder. He tells her they’ll go over it in detail once they attend a group therapy session.

Rebecca ignores Dr. Shin’s warning and researches BPD on her phone. She learns people with the disorder are stigmatized, need lifetime treatment and 10% of them die by suicide. Rebecca skips group therapy and returns home where she complains about her diagnosis to Paula, Heather and Valencia. Paula suggests they get a second opinion and they go to see Dr. Akopian. At the law firm, Nathaniel is still working on his note to Rebecca when George interrupts again. The ramblings of his employee triggers a long suppressed memory in Nathaniel, who leaves the office. He goes to his parents' house and asks his mother and father if she tried to commit suicide when he was a child.

Nathaniel’s parents refuse to discuss the matter and he gets kicked out after upsetting his mother. At Rebecca’s home, Heather believes Valencia’s social media updates are self-serving but her friend insists they are altruistic (♫ This Is My Movement ♫). Meanwhile, Rebecca and Paula barge in on Dr. Akopian’s session with Kevin who leaves. Rebecca insists she be given a new diagnosis but Dr. Akopian instead goes over several different symptoms of BPD. Rebecca accepts Dr. Shin was right upon realizing the list accurately describes her. She goes home and tells Heather and Valencia what happened before going to bed. Over at Sugar Face, Josh asks Hector how Rebecca is doing as he feels responsible for her actions.

Rebecca wakes up the next morning to find that Heather, Valencia and Paula had held a vigil outside her bedroom. She goes to use the bathroom and listens to some music (♫ You Do/You Don’t Want To Be Crazy ♫). Her friends worry when they don’t get an answer after knocking on the door. Much to their relief Rebecca opens the door just as Heather is about to use an axe to bust in. Valencia has an emotional breakdown unable to keep up her facade of inspiring hope when she can’t deal with the thought of losing her friend. Rebecca comforts her but says she can’t promise, even to herself, that she won’t attempt suicide again. All she can do is work on her issues and hope for the best.

A very sunburned Darryl arrives having just got back from a remote desert yurt with his boyfriend. Upon learning what happened he rushed back to West Covina in an open convertible. Rebecca apologizes to him and her friends for the horrible things she said to them days ago. Outside on the porch, Josh also shows up having brought a puppy for Rebecca. When he overhears Darryl inside the house blaming him for what happened, Josh keeps his presence hidden. Responding to Darryl, Rebecca said her actions weren't Josh’s fault as it was never really about him, but rather her own personal issues. When she declares him to be largely irrelevant to her now, Josh quietly departs.