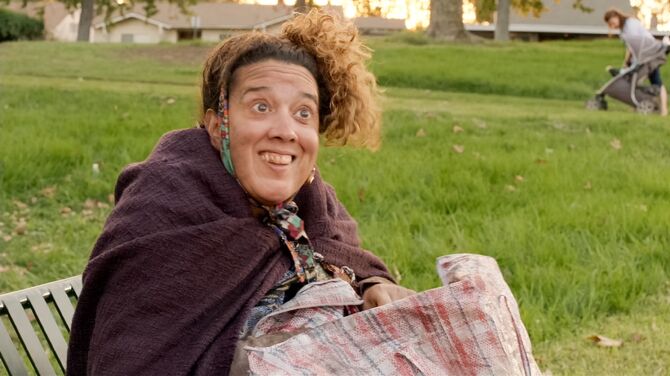 Joyce is a homeless person who frequents a park in West Covina, California. Rebecca Bunch decided to help her in order to prove to Greg Serrano she was a good person. Her first appearance was in the Season One episode "Josh and I Are Good People!". She is portrayed by actress Eileen Galindo.

Joyce was sitting on the park bench when Rebecca Bunch walked by. Joyce asked her if she had any change but Rebecca replied she only had twenty dollar bills which she got from working. Sometime later while Joyce was rummaging through her bag she was approached by Rebecca who unexpectedly gave her some money. She then asked Joyce if there was anything else she needed. Joyce then asked for a ride in her car. While buckled in the passenger seat, Joyce inspected the vehicle as Rebecca drove and talked about what was bothering her. When Joyce remarked that her car was nice Rebecca started quickly rattling off a list of the automobiles various features. In response to Rebecca's manic cadence Joyce could only stare sidelong at her.

This created an uncomfortable silence which Rebecca ended up breaking by ranting about someone named Greg. She angrily resolved to prove him wrong and Joyce asked to be let out of the car. Joyce asked Rebecca what her damage was which led to a quick synopsis of recent events (♫ Crazy Ex-Girlfriend Theme Song ♫). Sometime afterwards, Joyce was again on the park bench when Rebecca approached her once more. She told Joyce that the object of her affection Josh Chan had just admitted he was very attracted to her. Joyce celebrated Rebecca's "victory" by holding hands with her and screaming while jumping up and down ("Josh and I Are Good People!").