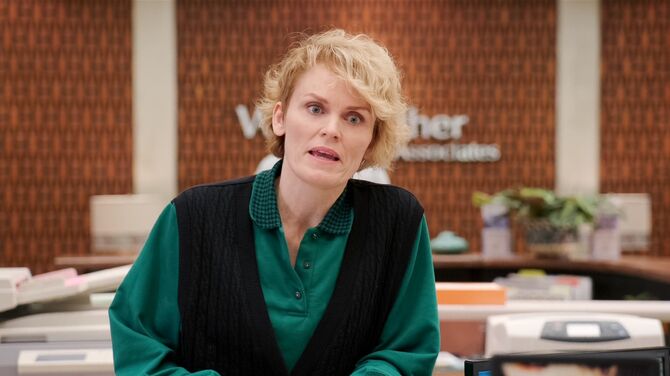 Karen is an associate at Whitefeather & Associates that works at the law firm as a case worker. She has a weird personality in which she tends to overshare inappropriate details about herself which annoy her co-workers. Karen is also bad at her job often getting distracted by drama in her personal life. She runs a side business under her persona of "Angelique" where she sells adult sex toys. She is currently on leave from the firm doing foot and hand modeling. Her first appearance was in Season One episode "Josh and I Are Good People!". She is portrayed by actress/comedian Stephnie Weir.

One day in November of 2015, Karen was at work when the head of Paralegal Paula Proctor asked her if she had filed some briefs. Karen replied she didn't get to it as she was distracted because her snake Long John Slither being sick. She added that her internet was down at home so she couldn't post about it on YouTube. Also her Twitter account had been hacked again. Paula was angered by all of Karen's excuses who walked off claiming her electrolytes were low. Rebecca later approached Karen about a crowd funding she had set up for her sick snake but Karen told her she just found out her pet's cancer was terminal. Rebecca surprisingly pledged a thousand dollars for to help Karen fight this.

That day Darryl and Rebecca announced they were leaving to deal with his custody hearing for his daughter. Karen told Darryl he couldn't go as she needed approvals for the case files she was working. Rebecca suggested that Paula be put in charge which Darryl approved. Once they left, Karen and her co-workers were uneasy fearing what Paula would do now. Her first act was to take Tim's toy gun away from him and break it in two with her knee. Karen claimed a shard of the toy lodged itself in her eye but Paula didn't believe her and told her and everyone else to get to work. Later, Karen and the other associates were forced to hand over thier cellphones to Paula. Karen also had to give up the gumball machine she had on her desk as Paula declared it was meant for everyone.

When Rebecca briefly returned she commented on how efficiently the firm was running Karen replied it was because Paula broke thier spirits. Later, as Karen was walking by the board room, she overheard Paula and Tim talking about her frequent discussions on tampons. Karen interrupted them and said she just switched to menstrual cups. However, she couldn't figure out how to use them and asked if they wanted to help her with that. Karen later witnessed Paula and Tim mocking Jim before returning to her assigned tasks. At home Karen shot video for her YouTube channel "Getting Real with Karen". It was a review of the product "The Beaver Dam Menstruel Cup" by Lady Works. Karen didn't care for the product saying that her "cup runeth the over" ("Josh and I Are Good People!").

Several weeks later, Karen and the entire firm applauded Rebecca Bunch when she managed to get a new wealthy client named Calvin Young. Darryl got teared up over Rebecca's claim that she convinced Calvin to hire them by getting him to see Darryl's vision of the firm as a family. She encouraged him and everyone else to "feel thier feelings" and let thier emotions out. Karen decided to speak up and mentioned that she was peeved. The source of her anger was the office copying machine but before she could continue her rant Rebecca told her to cork it. Karen tried once again to talk about the copier but this time Darryl told her to shut up. In response Karen exasperatingly tossed the papers that she had in her hands and stormed off ("I'm So Happy That Josh Is So Happy!").

In the latter half of 2016, Karen was a part of the law firm's legal team working on the "Miss Douche" account. Along with Darryl, Paula and Rebecca she met with one of the company's executives Trina to help with an expansion project. Karen told Trina how much she appreciated the "Miss Douche" project. Later along with the rest of the staff she viewed a YouTube video featuring an embarrassing 911 phone call Rebecca made. When Rebecca arrived at work Karen and Darryl asked if she was okay. Karen suggested she should go into witness protection unaware Rebecca didn't know about the humiliating video ("When Will Josh and his Friend Leave Me Alone?").