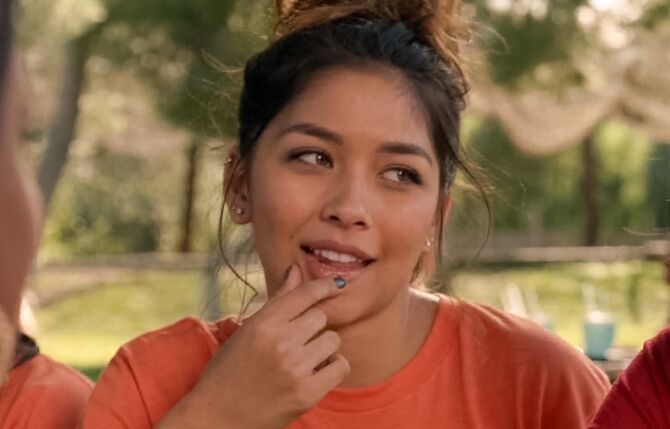 Kayla Mean girl at an at risk youth camp

Kayla was a West Covina teenager who in 2016 attended a camp for at risk teens. She was a part of a group of girls who gave one of the adult volunteers, Rebecca Bunch, a hard time. Kayla and her friends ultimately ended up helping Rebecca to make some romantic progress with her ex-boyfriend and fellow volunteer Josh Chan. Her first appearance was on the Season One episode "I'm Back at Camp with Josh!". She is portrayed by actress Lulu Antariksa.

In April of 2016, Kayla and her friends Tanya, Chloe, and Samantha were all going on camping trip for at-risk-teens. The teenage campers and adult volunteers met up to board busses transporting them to the park. While they waited the new "Director of Female Empowerment" Rebecca Bunch introduced herself. Both she and Tanya mocked her before boarding the bus. Kayla threw something at Rebecca and made a joke about glass ceilings. After arriving at camp one of their first activities was elbow tag which was organized by a volunteer named Josh Chan.

The participants paired up for the contest and Kayla choose Josh as her partner before Rebecca could. As Kayla gloated, Tanya introduced Rebecca's much large partner Samantha. A lack of teamwork resulted in Samantha accidentally striking Rebecca. Later, when Kayla had lunch with her friends, Rebecca forced her way onto the table finding a spot between her and Samantha. The adult volunteer then interrupted Tanya complaining about her ex-boyfriend to lecture her. Rebecca then asked the group where a private place can be found to take a good picture alone.

Kayla said that was a good idea and told her to go be alone eliciting cheers from her friends at the table. Rebecca replied that woman shouldn't be insulting each other but instead building each other up. She added that Kayla seemed to have an air of gravitas but Kayla didn't know the word and assumed she was talking about an STD.