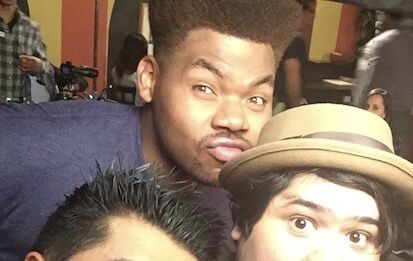 Ken Friend of Josh Chan and The Crew.

Ken is a resident of West Covina and friend to Beans. Both he and Beans are also close to Josh Chan and his crew. On one occasion they helped Chan out by being a buffer on a dinner date he had with Rebecca Bunch. His first and so far only appearance was in the Season One episode “Josh and I Work on a Case!.” He is portrayed by actor Devere Rogers.

Ken was invited was invited to to tag along with Hector, WhiJo and Beans to a dinner date Josh Chan was having with his ex-girlfriend Rebecca Bunch. They all arrived together at a restaurant called Jalapeño Jack's. He was there at Josh Chan's request since his friend didn’t want to be alone with Rebecca. Josh pretended to be surprised by their appearance and greeted them warmly. He then asked Bernard and the others to join them and take advantage of a free drinks coupon Rebecca had received. Josh introduced Ken and Beans to Rebecca who did not seem pleased everyone showed up.

As Josh hoped, Beans and the other managed to keep Rebecca separated from him all night. Ken was vocal about wanting to get drunk as Hector ordered up drinks with sombreros. When WhiJo recounted a “sprooshing” incident Rebecca tried to chime in with her own anecdotes but Ken and Joshs crew shut her out of the conversation (♫ Group Hang ♫). When the bill came, everyone was reluctant to chip in and Ken claimed he only had one mushroom. When Rebecca offered to pay Ken said she didn’t have to but didn’t refuse when she again insisted that she cover the bill ("Josh and I Work on a Case!").