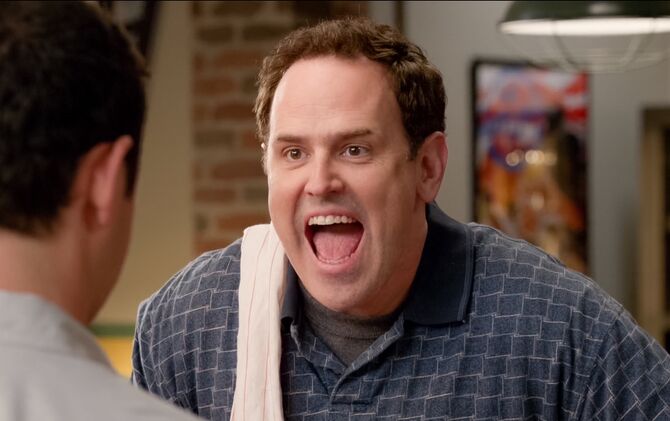 Kevin is the manger of the West Covina sports facility and bar Home Base. His employee Greg Serrano describes him as being "aggressively positive" since he is hardly ever in a bad mood and is always upbeat and happy. It's later revealed he has had a past traumatic experience and is in therapy with Dr. Noelle Akopian to deal with it. His first appearance was in the Season One episode "My First Thanksgiving With Josh!". He is portrayed by Johnny Meeks.

In November of 2015 several days before Thanksgiving, Kevin arrived at Home Base for his shift when his employee Greg Serrano asked for a moment of his time. Greg then launched into a tirade about his time working at the bar and Kevin suddenly realized he was quitting. He congratulated Greg who was taken back by his positive reaction. Greg continued on with his speech anyway and insulted his boss's breathe. Kevin mentioned he had a dental procedure recently but agreed that it doesn't excuse him from not irragating more frequently. He then had another realization and guessed that Greg was going back to business school. Kevin congratulated Greg and pulled him in for a hug.

On Thanksgiving day Kevin manned the bar at work when Greg returned apologetic over the things he said. Kevin told Greg he had bought a tongue scrapper and blew out a breathe to show how much better it smelled. When Greg awkwardly complimented it Kevin realized he wanted his job back and told him that wasn't his first "Netflix" inspired quit. He pointed out another employee named Javier who did the exact same thing. He told Greg he could have his job back and indicated he could start immediately. Greg protested since he had seniority to pick his shift. Kevin told him that wasn't the case since he is essentially a new hire and lost all such privileges ("My First Thanksgiving With Josh!").

Several months later, Kevin was approached by Greg about hiring his then girlfriend Heather Davis. Kevin met Heather and after complimented her beauty and honesty he hired her. He then embraced Heather in a hug before putting her to work at the bar. While servicing a table, Kevin noticed the bar's television was tuned to a local trial. He was excited to see two of the bar regulars Rebecca Bunch and Josh Chan and was upset when Greg turned off the TV. After Heather used the remote to turn it back on, Kevin became engrossed in the trial like everyone else at the bar. He booed the appearance of the opposing Audra Levine and commented that she looked like someone who eats everything 'on the side' ("Josh and I Go to Los Angeles!").

Months later, Kevin was questioned by Rebecca about Greg's whereabouts as her ex-boyfriend had been missing for awhile. Kevin refused to tell Rebecca where he was but mentioned Greg was in a safe place and offered no other details ("Where is Josh's Friend?"). When Greg came out of seclusion Kevin welcomed him back to the bar. He told Greg he inspired him to give up his gateway drug kettle chips, assured him he didn't have to serve alcohol and took beer battered shrimp off the menu. After Greg insisted they keep his condition private, Kevin loudly announced to the bar to be normal. Kevin was also present when Greg told his friends about his struggle with sobriety (♫ Greg's Drinking Song ♫) ("When Will Josh See How Cool I Am?").

Kevin felt the need to go to therapy and had sessions with Rebecca’s therapist Dr. Noelle Akopian. His felt happier than most people and was sad they weren’t as pleased with their lives as he was with his own. At one of his appointments Akopian felt he was dodging a much larger problem. She asked him to elaborate on the incident involving his mother shooting his father in front of him when he was a child on his birthday. Kevin claimed to have moved beyond that and before he could go further they were interrupted by Rebecca and Paula. Kevin allowed him to take over his session feeling Rebecca needed it more following her then recent suicide attempt. When Kevin left the room he then started crying and asking why his mom shot his father ("Josh is Irrelevant.").