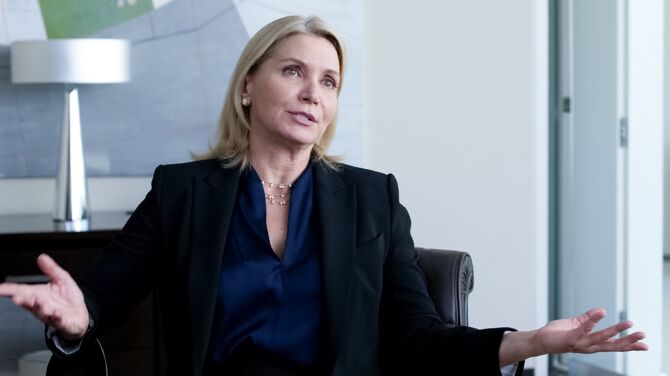 Laura is a partner at the New York City law firm of Sampson & Saunders and at one time Rebecca Bunch's boss. She and the other partners offered Rebecca a promotion at the firm and were shocked when she turned them down. Her first appearance was in the Season One episode "Josh Just Happens to Live Here!". She is portrayed by actress Isabella Hoffman.

In October of 2015, Laura and the other senior partners at the law firm of Sampson & Saunders had just agreed to promote one of their star attorneys Rebecca Bunch. Although she was young, Laura and the others had no problem giving the up and comer the position of junior partner. They truly appreciated Rebecca's hard work and tireless dedication to the firm and considered this a well deserved reward. Laura had Rebecca report to the board room for a meeting to give her the good news. She was taken aback by Rebecca's response as she didn't seem surprised. Rebecca also appeared to be distracted by something else and disinterested at the incredible opportunity just presented to her.

Rebecca launched into a vague, rambling monologue about time and destiny. When Laura and the others expressed their confusion, Rebecca clarified that another much better opportunity had presented itself to her. Rebecca told Laura that she respectfully declined their offer and got up to leave. One of Laura's colleagues asked if she was quitting to go to another firm. Rebecca didn't want to elaborate and was about to go when Laura started going down a list of competing firms. She asked if it was Cromwell, Chicago or Boston but Rebecca told her it wasn't any of them. The only clue she would give Laura before she left the office was that her new opportunity was "where dreams live" ("Josh Just Happens to Live Here!")".