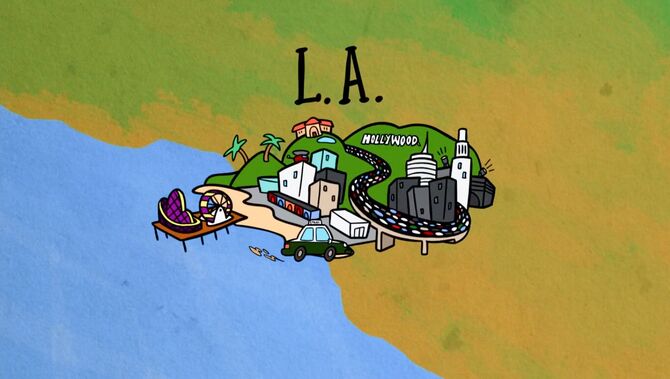 Los Angeles Southern California city and home of the television and film industry
Location: California — Debut: "Josh and I Go to Los Angeles!"

In 2016, the West Covina law firm of Whitefeather & Associates filed a class action lawsuit against the company known as Greater City Water. The matter directly involved the neighboring city of Los Angeles so the hearing was scheduled at the L.A. district courthouse. The specifics of the motion that the lead attorney Rebecca Bunch filed claimed GCW was diverting water from various cities in the San Gabriel Valley to Los Angeles. According to their star witness, who was a former employee of the company, this also indirectly created a cold shower epidemic experienced by those residents due to the loss of water pressure. Whitefeather & Associates reached out to the victims of GCW's alledged actions to be a part of the law suit.

At the time for the scheduled hearing Rebecca Bunch, Paula Proctor, Darryl Whitefeather and their main client Josh Chan all met up at to Los Angeles County courthouse. They waited for the other litigants from cities around the San Gabriel Valley to join them there. They were pleasantly surprised when a huge crowd formed garnering the attention of L.A. passerby's including actor B.J. Novak. The local news also took notice as well with a reporter from the Los Angeles metro service named Paul Ramirez covering the case. Although the Whitefeather & Associates team had a compelling case they lacked hard evidence. They suffered a serious setback when the opposing counsel of Sampson & Saunders cast serious doubt on their star witness' testimony.

Ultimately the judge had the case thrown because of this despite a passionate closing argument Rebecca Bunch gave. Although she and her clients lost they had a victory of sorts later. Paul Ramirez approached Rebecca after the trial was over and suggested if her claims were true than it would be the biggest scandal in Los Angeles since the City of Bell Scandal. Rebecca had in her possession documents which she didn't submit as evidence as they were obtained illegally by an confidential source. She gave them to Ramirez who used this material as the basis of an article he wrote. It exposed GCW's illicit activities to the public and the local Los Angeles story wound up making the national news ("Josh and I Go to Los Angeles!").

In 2016, Josh Chan began dating a Los Angeles native named Anna Hicks whom he met at the annual Electric Mesa festival. Anna lived in the popular Silver Lake neighborhood where she owned a beauty salon. After seeing each other for a few weeks they met up at a trendy coffee shop Anna frequented called Silver Brew. After Josh awkwardly made an order for one of the many varieties of coffee there he gave Anna a gift. It was a collar for her pet cat 'Gravy' which she loved. While they were there they posted a few pictures of themselves at the coffee shop on thier Instagram accounts. This got noticed by Josh's exes Rebecca Bunch and Valencia Perez who were cyber stalking him.