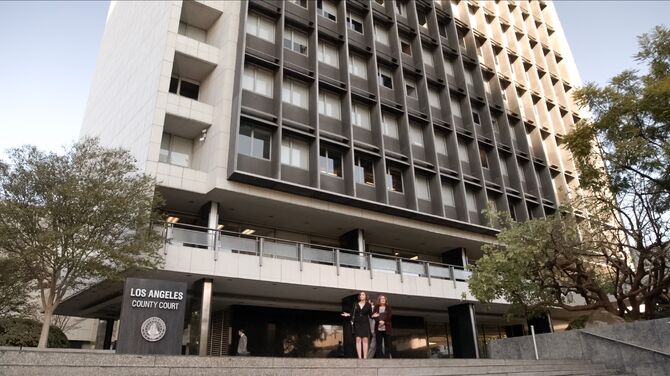 The Los Angeles County Court is a judicial building in L.A. where court trials on are held. The courthouse such hearing took place there involving a conglomerate defending itself against accusations of illicit activities. This particular trial was also broadcast live from the building on close circuit local television. The courthouse's first appearance was in the Season One episode "Josh and I Go to Los Angeles!".

In 2016, attorney Rebecca Bunch and her West Covina law firm Whitefeather & Associates filed a class action against Greater City Water. They claimed the company misappropriated the water supply diverting it from the surrounding cities into Los Angeles. This resulted in low water pressure and a cold shower epidemic throughout the San Gabriel Valley. On the day of the trial, Rebecca Bunch and her law team met up the head plaintiff Josh Chan at the Los Angeles County Court. They were eventually joined by a crowd of the other clients and a brief demonstration around the courthouse. This was noticed by a number of L.A. citizens including actor/writer B.J. Novak (♫ Flooded with Justice ♫).

Once inside the building the trail was officially started and presided over by Judge A. Sacerello. Rebecca had Josh take the stand to testify about his experiences with the water problem followed by the rest of the plaintiffs. Rebecca then got her star witness Bert to give his expert testimony detailing how GCW has been stealing water from various cities. When cross examination began, the opposing counsel Audra Levine quickly discredited Bert by revealing he had been suffering from schizophrenia for the last sixteen years. With her case now taken a major blow Rebecca asked for a recess to strategize and the courtroom was cleared.

All seemed lost until Rebecca's former Harvard University classmate Trent Maddock arrived at the courthouse. Wanting to win Rebecca's affections, Trent hacked into the Greater City Water servers and uncovered pages of emails documenting the history of criminal activity by the company. Rebecca struggled with using the illegally obtained evidence. When recess was over and the court was back in session she ultimately decided not to. Instead she gave a passionate closing argument. This wasn't enough to sway the judge since Bert's testimony now tainted so Sacerello had no choice but to throw the case out of court.

Meanwhile at Home Base, Greg Serrano was watching the trial on television along with his girlfriend Heather Davis and the other patrons. Heather realized Greg was in love with Rebecca and encouraged him to go to the courthouse and see her (♫ Don't Settle For Me ♫). Back at the L.A. courthouse, Rebecca gave a reporter from the metro the hacked emails to help break the scandal. Josh Chan then approached and praised Rebecca for her efforts. He then kissed Rebecca as Paula spied on them from courtroom entrance. She was joined by Greg who had driven to L.A. to confess his feelings for Rebecca. Upon seeing Josh and Rebecca together he quietly left the courthouse ("Josh and I Go to Los Angeles!").