Crazy Ex-Girlfriend Wiki
Register
Don't have an account?
Sign In
Advertisement
in: Characters, Josh Chan, Season One Characters,
and 4 more 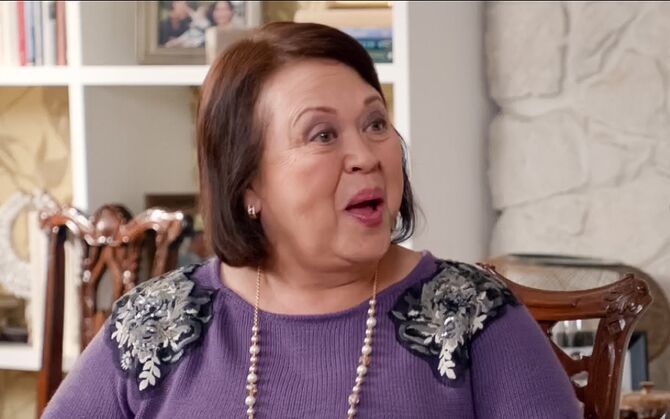 Lourdes Chan is a Fillipino resident of West Covina, California who is married to Joseph Chan and is the mother of Josh Chan. Despite her kind and welcoming personality she has a strong dislike of Valencia Perez, Josh’s ex-girlfriend. This is possibly due to Valencia’s similarity to her younger sister Myrna whom she finds annoying. Lourdes has a sarcastic side and will often snidely comment on things usually backed up by Joseph who always agrees with her. When pushed she can be direct and harshly blunt about her complaints, even with her own family. Her first appearance was in the Season One episode "My First Thanksgiving With Josh!". She is portrayed by actress Amy Hill.

In the summer of 2005, Lourdes Chan and her husband Joseph picked up their son Joshua from camp to take him home to West Covina, California ("Josh Just Happens to Live Here!"). She learned while Josh was there that he briefly dated and then dumped a girl named Rebecca Bunch. For some time afterwards Rebecca called the Chan residence trying to contact Josh. Ten years later Mrs. Chan unexpectedly ran into Rebecca and her co-worker Paula Proctor at an Asian grocery store. Rebecca had just moved to the area and Mrs.Chan was impressed to learn how she had become a successful attorney.

Paula pointed Rebecca had no plans for Thanksgiving which was coming up in a few days. Thinking that she should not be alone on such a day, Mrs.Chan graciously invited Rebecca to the Chan family get together she was hosting. She contacted Josh to let him know and was correct in assuming he wouldn't mind having Rebecca there. On the day of the dinner Rebecca ingratiated herself to the entire family including Mr.Chan who was notoriously hard to charm ("I Give Good Parent"). Mrs.Chan happily chatted with Rebecca and ignored Josh's girlfriend Valencia Perez. After dinner she asked Rebecca if she wanted to go with the family to church services over Valencia's protests.

Rebecca agreed and thanked Mrs.Chan for being so welcoming before excusing herself to use the powder room. Mrs.Chan was disappointed when Rebecca returned and told her she had to pass on going to church. It was then that Josh got everyone's attention for an announcement he was going to make. To Mrs.Chan and Rebecca's surprise he told everyone he was planning on moving in with Valencia. Mrs.Chan disapproved but was forced to accept her sons decision. Later she gave Josh a few leftovers from the dinner to take home. On a parting note she advised her son to use contraception if he's going to live in sin ("My First Thanksgiving With Josh!").

After the Thanksgiving dinner Lourdes kept in touch with Rebecca throughout the following months. Rebecca and her were in the same book club, she helped Jayma's fiancée Phillip pick out an engagement ring and also wrote a letter of recommendation to Harvard for her Jastinity. A chance meeting with Paula Proctor gave Lourdes the idea of having Rebecca be one of Jayma's bridesmaids. Lourdes and her daughters went to Rebecca's apartment to ask if she'd be interested. Rebecca was unsure feeling that Valencia should have the spot instead. Lourdes was pleased when Jayma decided to have both of them be bridesmaids to make Rebecca more comfortable.

Several days later, Lourdes' daughters and their cousin Ruby met up with her at a wedding cake tasting she arranged. Not long after arriving Jayma received an alert about an Instagram picture Valencia uploaded. It showed her brother's girlfriend in Jayma's wedding dress with a hashtag reading "hotterthanthebride". Lourdes joined her daughters and Ruby to confront Valencia at the bridal shop. A furious Jayma told Valencia she ruined her wedding only for everyone to be shocked when Rebecca took responsibility for what happened. After Lourdes chastised Rebecca she and the rest of the Chans became sympathetic towards Valencia and finally welcomed her into the family ("Josh's Sister is Getting Married!").