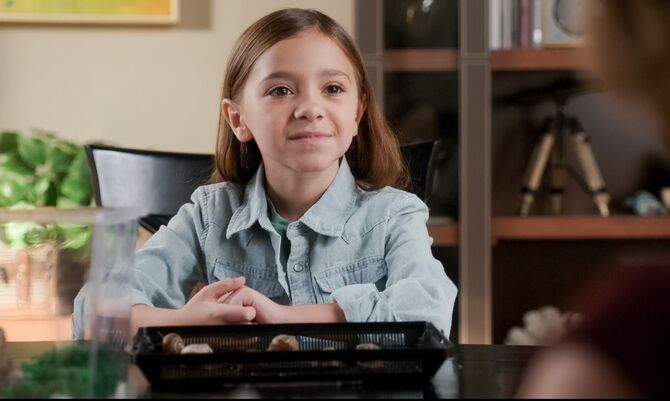 Madison Whitefeather is the daughter of Darryl and Stacy Whitefeather. She is a snail enthusiast and keeps several as pets, giving each one names which are puns on the names of celebrities. She even has a YouTube channel dedicated to talking about the mollusks. Recently, her parents were getting a divorce but the legal wrangling for custody over her became long and drawn-out. It wasn't until Madison herself presented some interesting evidence that Darryl's attorney, Rebecca Bunch, managed to hasten the proceedings to a satisfactory conclusion for all parties involved. Her first appearance was in the Season One episode "Josh and I Are Good People!". She is portrayed by actress Olivia Edward.

In 2015, Madison Whitefeather's parents were getting a divorce but the legal battle over custody for her was becoming a lengthy process. Her father Darryl got the best lawyer from his law firm Rebecca Bunch to represent him in the custody hearing. Rebecca visited Madison while she was at her father's apartment playing with her snails. Madison was asked who she wanted to live with and she enthusiastically replied she'd rather stay with her dad. Over her father's objections, Rebecca then asked if Madison knew anything that could help her father win custody. After thinking for a bit, Madison brought up that her mother would leave her alone by herself sometimes. Madison further explained that she tracked her location via her mother's iPad and found out her mom was at a motel with her boss.

Rebecca used a video from Madison's YouTube channel "Snaileysitters club" to corroborated the claim at a emergency hearing with the judge. With the evidence she got Madison's father temporary full custody. Madison and her father accompanied Rebecca to Home Base to celebrate. They weren't there long before Rebecca told them she had a crazy plan to get her father permanent full custody. Her explanation was garbled at first due to a spoonful of an ice cream sundae she ate which was meant for Madison. She then rexplained her plan which involved planting cash in her mother's luggage for her trip to the Cayman Islands. Since transporting cash over the border is illegal once it's found by security she'll be arrested settling the custody dispute permanently. When Rebecca ran out to execute her plan, Madison told her father his employee was bananas.

Sometime later, Madison and her father were again at Home Base where she was scheduled to play a game with her little league team. They were surprised when her mother showed up and she told then she postponed her trip. Madison noticed she was with Rebecca whom she called the "crazy lady". This earned her a reprimand from her father but Madison continued on mentioning Rebecca's funny plan to frame her mom. At that point Rebecca cut her off by announcing Madison's mom and her decided to settle the custody arrangement. They resolved to do this equitably and without a judge. With everyone pleased at having resolved the matter, Madison was accompanied by her parents to her game ("Josh and I Are Good People!").

In the latter half of 2016, Madison was introduced to her father's new boyfriend Josh Wilson for the first time. They had been seeing each other for months but her father didn't want to put any pressure on Josh so they hadn't met yet. When Josh and her father attended the Electric Mesa festival they both realized they wanted a serious commitment. To that end, Madison was brought by her father to Cup of boba to finally meet Josh. He had bought her a stuffed toy resembling a snail but she told him she was more into unicorns now. However, she did happily accept the gift remarking that he could by her a unicorn to go along with it. She told her father she liked his boyfriend remarking "he ain't cheap" ("Why Is Josh's Ex-Girlfriend Eating Carbs?").

"Josh and I Are Good People!"Edit

“Oh! Well, sometimes my mom leaves me by myself and I went on her iPad and it turns out she goes to a motel with her boss. That's something right?”— Madison

Retrieved from "https://cxg.fandom.com/wiki/Madison_Whitefeather?oldid=17543"
Community content is available under CC-BY-SA unless otherwise noted.