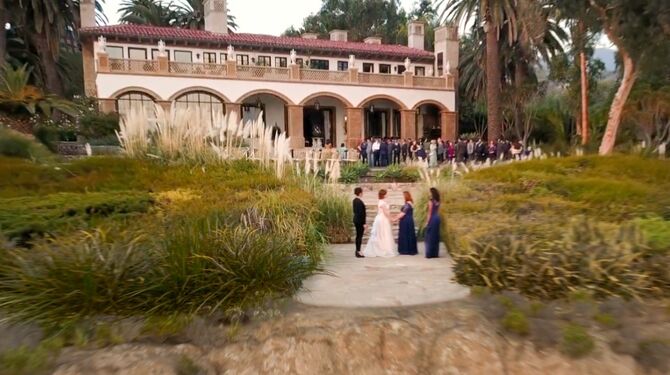 Malibu Cliffs Villa & Spa is a destination resort which provides accommodations for lodging, recreation, and a venue ideal for hosting special events. The main building is located near the edge of an oceanside cliff providing a scenic atmosphere. Because of this the property has been used in several film and television productions. The villa was also chosen to be the site of Rebecca Bunch and Josh Chan's wedding. It's first appearance was in the Season Two episode "Josh Is the Man Of My Dreams, Right?".

In 2016, Rebecca Bunch and Josh Chan got got engaged and she researched online for a place to hold the ceremony. Rebecca found what she believed to be the perfect location after coming across the Malibu Cliffs Villa & Spa's website. She showed this to Josh who quickly agreed as he recognized this as the same place where a scene from the movie "Step Brothers" had been shot. However, it was booked solid and they were put on a two year waiting list. Rebecca then bribed one of the couples on the waiting list to take their spot which meant moving the wedding date up considerably to two weeks time. On the day of the event, the wedding party and guests arrived at the villa. Rebecca took the time to soak in the atmosphere and went to the seaside cliff behind the hotel.

She happily reflected for a moment on how all her hopes and dreams were about to come true (♫ Rebecca's Reprise ♫). However, her fiancée Josh had yet to show up as he was wrestling with doubts he had about the marriage. As the time of the ceremony drew near, Rebecca's event organizer Valencia Perez had Heather Davis go to the entrance to see if Josh had arrived yet. Heather witnessed Josh approach the gates in his Toyota 4Runner without stopping and slowly drive off. She and Valencia went to Rebecca's bridal suite in the hotel to tell her what happened. As the guests outside wintered what the hold up wars Father Brah showed up at Rebecca's room with some news. She stunned to learn Josh was leaving her to become a priest. Ignoring her friends attempts to remain calm Rebecca ran outside of the building past her guests.

She headed towards the villa's cliff and stopped near the edge of the precipice to look down at the ocean below. As her bridesmaids and the other attendees watched on with concern Rebecca warned everyone to stay back. She tried to process how yet another man she loved left her again. This dredged up a painful long suppressed memory involving another love, her former Harvard University professor Robert Donnelly. This caused her to faint but fortunately she was caught by her maid of honor Paula Proctor. Rebecca's best friend assured her those broken relationships were not her fault. This inspired Rebecca to angrily confront her father Silas who was the first man to abandon her. As he left the resort in a huff Rebecca turned her attention to plotting her revenge on Josh Chan ("Can Josh Take A Leap Of Faith?").