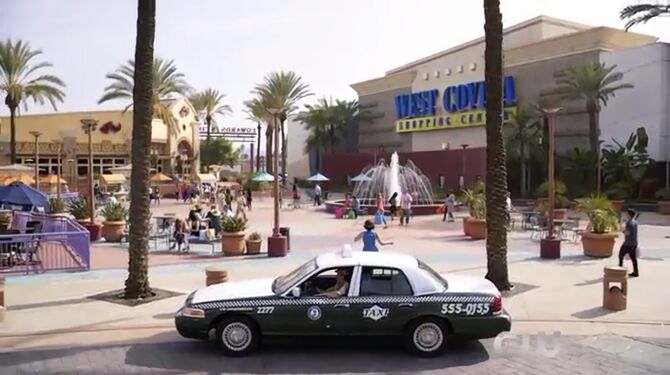 The Mall is a large shopping complex located in West Covina, California. Along with a variety of shops and kiosks it has a movie theater, chain restaurants and an outdoor plaza with a stage where performances are held. The mall was one of the first places Rebecca Bunch visited after moving to West Covina. It's first appearance was in the Season One episode "Josh Just Happens to Live Here!".

In October of 2015, the latest resident of West Covina Rebecca Bunch went to the shopping mall. She takes in the atmospheres imagining that her visits to local merchants such as an anime wig vendor and a pretzel selling kiosk is a musical number. She also goes to a strip club and gets a personal performance from a dancer there called 'Destiny'. She nearly has a nervous breakdown as the ridiculousness of her recent impulsive choices start to weigh on her mind. After calming down, Rebecca resumes her fantasy as her performance is now backed by a huge crowd. She sat down on a giant pretzel which was hoisted into the air above the gathering below and belted out a cheery song (♫ West Covina (song) ♫) ("Josh Just Happens to Live Here!")

In December a few days before Christmas, Greg is at the mall to buy presents for his half-siblings Mason and Lilly where he runs into Heather Davis who is working there dressed as an elf. After learning he's going to his mother's lavish Christmas Eve dinner she finagled an invitation. Elsewhere, Josh goes to the mall and is recognized by a teenager named Nguyen as the former captain of his high school's dance crew. Nguyen asks Josh to join them for rehearsals of a performance they are doing at the mall. Josh declines citing work but changes his mind and blows off his job to stop by the mall and meet Nyguyens crew. After noticing Josh is pining for his high school glory days , Nyguyen pretends to be injured and encourages Josh to take his place in the performance.

At one of the more high end mall shops, Rebecca is there with her mother Naomi to exchange a gift she had given her. When they head toward the outdoor plaza, Rebecca and her mother hear an announcement that Josh Chan is performing. Naomi realizes the true reason her daughter moved to West Covina and confronts her about it. Rebecca deflects her mother's accusation and brings up Naomi's relentless criticisms of her which she believes stems from her mother hating her. Naomi vehemently denies this is the case and explains she treated harshly to toughen her up. While she disagrees with Rebecca's choices she tells her daughter she has always loved her unconditionally.

As the two have a cathartic moment, Josh comes to a realization of his own after his dance performance. Josh tells Nyguyen he appreciates the spotlight but that he's not a kid anymore and needs to just let this stuff go. Meanwhile, Greg finds Heather and thanks her for helping him mend his relationship with his mother. He is surprised when after asking her out she agrees, quits her job and then kisses him. Back at the plaza, Rebecca and Josh run into each other and commiserate about how bittersweet the Holidays have been so far. Rebecca asks if Josh wants to go see Santa and he happily accents the invitation. In Rebecca's imagination a musical performance with her and her friends starts up (♫ California Christmastime ♫) ("My Mom, Greg's Mom and Josh's Sweet Dance Moves!").

Places at the mall[]