< Mall
Edit
watch 01:36
We're Getting Mutants in the MCU - The Loop
Do you like this video?
Play Sound 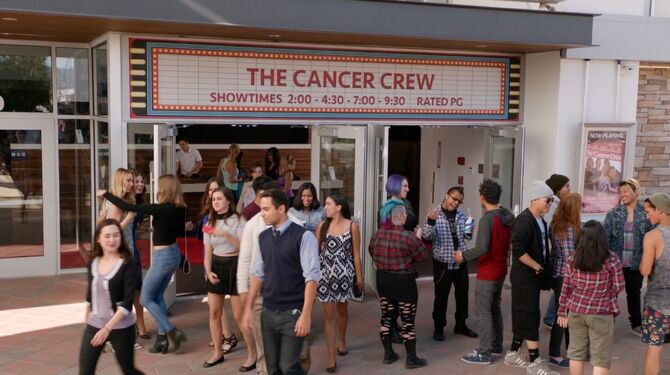 Movie theater Cinema venue where the latest films are shown
Location: Mall — Debut: "I'm Going to the Beach with Josh and His Friends!"

The Movie theater is located on the Mall's outdoor plaza. Rebecca Bunch went there to one time to see a movie and afterwards ran into Josh Chan and his crew. It's first appearance was in the Season One episode "I'm Going to the Beach with Josh and His Friends!".

In 2016, Rebecca Bunch went to the Mall's movie theater to see the movie "The Cancer Crew" by herself. Rebecca devoured a bucket of popcorn as she tearfully watched a story of a group of friends dealing with one of them having cancer. Once outside the theater she saw similar close knit social circles congregating. Feeling down that she didn't have any friends herself she ruefully sang a song (♫ I Have Friends (reprise) ♫). While walking away from the theater she spotted Josh Chan with his girlfriend Valencia Perez alongside his friends Hector, Josh Wilson and Greg Serrano. They had just left the theater themselves and were sitting down at nearby benches to duscuss the movie they just saw ("I'm Going to the Beach with Josh and His Friends!").