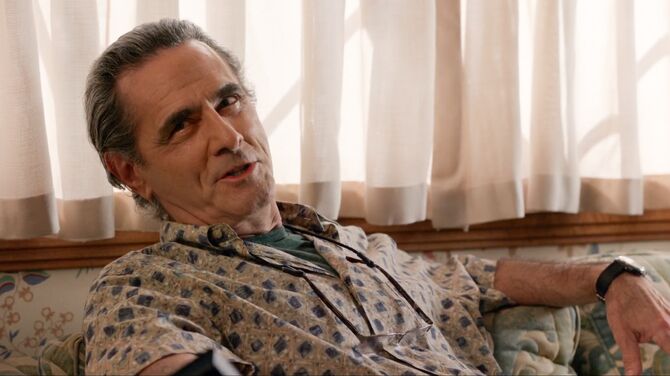 Marco Serrano is a retired West Covina, California native who used to run a popular local restaurant called "Serrano's Trattoria". He is also the father of Greg Serrano who is currently attending Emory University. He raised him alone as Greg's mother Shawna left them when his son was just a boy. The two have a very close relationship to the point that Greg feels comfortable telling him just about anything in his life. Marco has two macaws he is very fond of which he named after his favorite singers. He has bad health and is stricken with emphysema which is not helped by his poor diet, alcoholic consumption and smoking habits. His first appearance was in the Season One episode "My First Thanksgiving With Josh!". He is portrayed by actor Robin Thomas.

On Thanksgiving day, Marco Serrano was at home enjoying a thick steak, drinking whiskey and smoking cigarettes at the dining table. His son Greg walked in and criticized him for his unhealthy choices but Marco was unapologetic about it. Greg then mentioned there were a few things he needed to talk to him about but Marco derailed the conversation by mentioning that he was thinking about getting third bird and naming him "Tony" after Tony Bennett. When he saw how serious Greg was being he asked him what he wanted to say. Before Greg could talk Marco launched into a coughing fit and his son went to get the oxygen tank. After he left, Marco collapsed on the table and fell unconscious.

He was taken to Glenn Willow Medical Center where he was treated for his emphysema and put in a private room. He flirted with his doctor, Cathy Johnson, and asked if she would like to join him outside for some whiskey and a smoke. Later that night, Marco was in his hospital room watching TV when Greg returned with his bathrobe. Thanks to one of the nurses spilling the beans Marco told his son he knew Greg spent his savings on the additional medical expenses. He insisted Greg not waste any of his money on him and instead finally move on with his life. However his son stood by his decision and Marco told Greg he loved him ("My First Thanksgiving with Josh!").

Months later, Marco was at home watching television when Greg was going on about a dilemma he had regarding his new significant other Rebecca Bunch. His son was afraid he would always be runner up in her heart to Josh Chan. Marco told him she chose to be with him so Greg shouldn't worry particularly since this was made clear by all the sex the two them were having. Marco told his son he had issues as Greg lamented that he told his father too much. Marco heard Greg theorize the reason Rebecca liked him now was because he stopped chasing her. He decided to act uncaring and aloof around her to keep her interested. Marco pointed out this was his insecurities talking and called his son an idiot ("Paula Needs to Get Over Josh!").

In the latter half of 2016, Marco's son Greg had a DUI and got sentenced to attend Alcoholics Anonymous meetings. Greg was embarrassed and lived in seclusion for a month cutting off contact with all his friends. Marco protected his son by keeping his whereabouts a secret when various people asked where he was. When Greg's ex-girlfriend Rebecca Bunch he told her as well he had no clue as to where his son was. They didn't have the best relationship which was why she brought hummus as a peace offering. When she tried to leave with it he wrestled the hummus away from her. After she was give Greg thanked his father for covering for him. Marco told him eventually he'd have to face his friends and Rebecca and tell them the truth ("Where is Josh's Friend?").

Soon afterwards, Marco was approached by a realtor interested in buying his house who intented on flipping it for a profit. Marco was offered ten times what he originally paid for the house and enthusiastically agreed. He officially closed the deal a few days later just as Greg walked in on him signing the papers. Marco broke the news to his son explaining that it was too good an offer to pass up. He also told him that half the money was his and that Greg could now go to Emory University like he always wanted. Marco added that he had found a retirement home to settle in that would help care for his emphysema. He told Greg he could leave now with a clear conscience to pursue his dream.

In 2017, Marco was at a bar Greg used to frequent when he was approached by Greg’s ex-girlfriend Rebecca Bunch. She stopped by to say hello and to surreptitiously question him as to how Greg was doing. He told her Greg was still sober, doing well at school and had also fallen in love with a girl in his class. Rebecca wanted the details on that person but Marco refused as he told her his son was finally happy and content. She was upset to hear this as she had hoped he was as miserable as she was. Marco told her that whatever she was going through she’d be fine as she was smart and had a nice figure. Unexpectedly Rebecca took his compliment as an invitation and went back with Marco to his place where they had sex ("Josh’s Ex-Girlfriend is Crazy").