Crazy Ex-Girlfriend Wiki
Register
Don't have an account?
Sign In
Advertisement
in: Characters, Greg Serrano, Season One Characters,
and 4 more 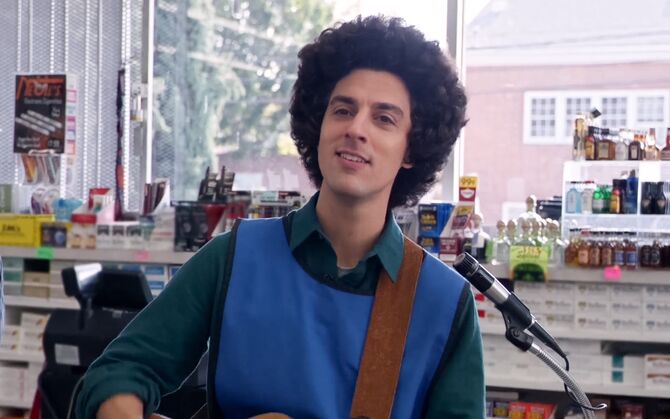 Marty is an employee at the Country Market grocery store in West Covina, California. Surpringly he is also a graduate of a prestigious university. Rebecca Bunch met him a few times once when she was shopping at his store and again when they were both at the local nightclub Spider's. Greg Serrano once tried to help him woo a female co-worker named Ally. His rival for his fellow employee's affections is shown to be a Grocery Clerk with half an eyelid. His first appearance was in the Season One episode "Josh's Girlfriend is Really Cool!". He is portrayed by Hunter Stebiel

Marty was working one night at the Country Market when he met the town's latest resident Rebecca Bunch. He saw her looking at a couple making out and she revealed that the guy was her ex-boyfriend. Marty took a closer look at the girl being kissed and complimented her derrière. He then asked Rebecca if her ex-boyfriend knew she was still into him but got an angry denial in response. Marty later bumped into her at the local nightclub Spider's and asked her if anything happened with her ex-boyfriend yet. He noticed her mood and realized her ex-boyfriend was still with his hot girlfriend. Marty chucked Rebecca under the chin and told her she'd get him eventually. Before he left he reminded Rebecca the grocery store was having a sale on Clementines ("Josh's Girlfriend is Really Cool!").

Several months later, Marty bumped into Greg Serrano who was trying to get some coffee at the store. Greg noticed Marty was looking affectionately at a female grocery clerk and asked him about it. Marty told him her name was Ally and he's been unsuccessfully trying to woo her for a while. The major stumbling block is that she only has eyes for another employee. His name was Brody and she quit a manger position at another store just to get hired at Country Market to be near him. Marty gets Greg's sympathy as he has a similar problem and offers to help him out. The next day at Greg's urging Marty performs a song he wrote for Ally live at the grocery store on the loud speaker ("Clean Up on Aisle Four"). For a moment Ally seems smitten by the song until Brody interrupts.

Brody performs a series of cartwheels which wins Ally's and the crowd in the grocery stores approval. Afterwards, Marty and Greg commiserate on his latest failure. Marty revealed previous plans he had to win Ally's heart including numerous texts and a skywriting incident hide wrong. Marty asked Greg what his next move should be. Greg told him to stop his pursuit as its unhealthy to chase after someone who doesn't like them back. Marty reluctantly agreed since he's been making such bad descions for a while now pointing out that even though he's a Harvard University graduate he ended up working at a grocery store. Greg compared the situation to his own problems which Marty correctly guessed involved Rebecca Bunch ("Josh's Sister is Getting Married!").

After wearing down Ally with his romantic overtures and many songs Marty and her started dating and eventually got engaged. Marty was aware of her cheating on him repeatedly but chose to ignore this as he was happy they were going to be married. They met with local event planner Valencia Perez at Home Base to discuss thier engagement party. Valencia was joined by Rebecca Bunch who remembered thier brief encounters from before. Marty and Ally were concerned about the cost as neither were doing to well financially. Valencia assured they could afford the party she had in mind which was Octoberfest themed. Marty and Ally invited friends, family and co-workers, including Brody, to attend.