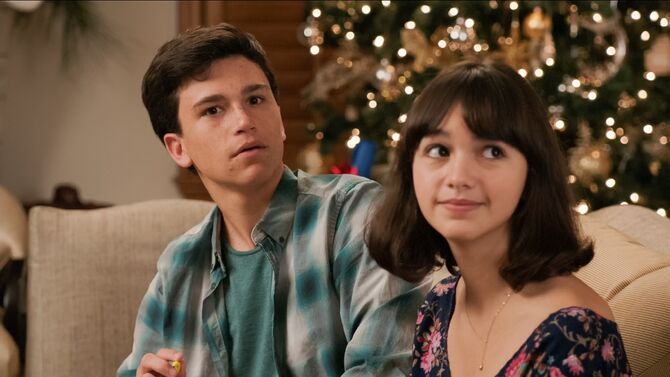 Mason and Lilly are the twin children of parents Shawna and Stewart; they are also the half-siblings to their mother's first child Greg Serrano. They tried their best to get along with him but for years Greg had an irrational dislike of them. It didn't help that they were born into a wealthy lifestyle as opposed to their older brothers more working class upbringing which caused some resentment. They were portrayed by actor Kalama Epstein as Mason and actress Taylor Blackwell as Lilly. Their first appearance was in the Season One episode "My Mom, Greg's Mom and Josh's Sweet Dance Moves!".

In December 2015 on the day before Christmas Eve, Mason and Lilly were getting set for their mom's annual traditional of having a lavish holiday dinner. They were anxious about it as their snarky half-brother Greg Serrano was also to attend. Since he was a bartender they decided to watch a few YouTube videos online so as to learn how to properly prepare a drink. When Greg arrived for the dinner they cheerfully served him and his guest Heather Davis. They gave them virgin cocktails ornamented with candy canes, a unique drink they made themselves. Their mother Shawna was proud of them and told Greg the twins went to all that trouble because they think it's cool their older brother works in a bar.

Greg wasn't appreciative of the gesture and in response lectured everyone that romanticizing the working class promotes economic disparity. As their father Stewart defended Shawna's statement, Mason and Lilly tried to ignore Greg's sanctimonious rant and started playing on their phones. However, they both looked up at the same time when Greg referred to them as freeloaders. Sometime later, Mason and Lilly started constructing a gingerbread house while Heather and their father Stewart looked on. Greg pulled Heather away to chastise her for fraternizing with them. Unwilling to deal with the tension Greg was creating, Heather revealed to Shawna that Greg was acting this way because never got over her abandoning him.

Heather then asked if she could get a to-go plate which elicited incredulous looks from Mason and Lilly. As the twins continued to build the gingerbread house, Shawna and Greg dealt with the longstanding issue between them. Greg couldn't believe it when Heather pointed out that he was clearly in the wrong and needed to grow up. Mason spoke up and agreed with Heather noting that she's cool but Greg had been a dick and acting horribly to everyone all night. Shawna chastised Mason for his remark but Greg considered this for a moment before conceding that he was right. Mason and Lilly were surprised he took the criticism well and were pleased when Greg aplogized to their mother ("My Mom, Greg's Mom and Josh's Sweet Dance Moves!").