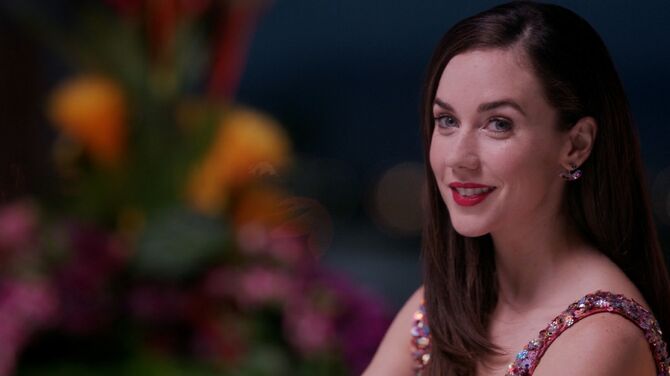 Mona is a graduate of Stanford University living in West Covina, California. She currently works as a mutual funds manager and once dated attorney Nathaniel Plimpton III who is a fellow Stanford alum. She and Nathaniel were planning to move in together but due to an unfortunate incident involving her boyfriend and his ex-girlfriend Rebecca Bunch it now seems unlikely. Her first appearance was in the Season Three episode "Nathaniel Gets the Message!” She is portrayed by actress Lyndon Smith.

After graduating from Stanford University Mona began working at a mutual funds investment firm in West Covina, California. While playing a scavenger hunt game at a local gay bar she ran into fellow Stanford alum Nathaniel Plimpton III. He helped her cross an item off her list by providing his boxer shorts to her. They began chatting and after meeting his friends Josh Chan and Josh Wilson she went home with Nathaniel ("Nathaniel Gets the Message!"). She started dating Nathaniel and he began cataloguing their outings on his Instagram page including a brief trip to Raging Waters ("Oh Nathaniel, It's On!"). Mona also accompanied Nathaniel to a baby shower for his co-worker Darryl Whitefeather’s soon to be born child ("Nathaniel and I Are Just Friends!").

She enjoyed their time together but suspected he was cheating on her which she told her therapist Dr. Davit Akopian. Her suspicions were proven correct when she met Nathaniel for dinner after he went incommunicado on her for a few days. Nathaniel apologized for this and out of nowhere asked her to move in with him. Mona accepted but bluntly asked if he had been sleeping with his co-worker Rebecca Bunch. Nathaniel admitted he had been but that it was over. Mona told him she should have spoke up sooner but she was hoping Nathaniel would eventually come around. She added that she didn’t want the same kind of relationship their parents had and wanted something real. Mona, in a roundabout way, then told Nathaniel she was going to give him another chance ("Trent?!").

Days later Mona was with her boyfriend at a furniture store shopping for items to add to his apartment when she moved in. Mona had officially forgiven Nathaniel and even joked about his affair with Rebecca. She was looking forward to a house warming party Nathaniel was going to throw. Later, while Mona was in the shower Nathaniel arrived at his apartment concerned about something. When he didn’t tell her what she teased she had a secret as well, her hair was naturally curly. Before the party Mona helped put the finishing touches on the decorations. When the festivities began the party was a big hit until an uninvited Rebecca Bunch showed up. Rebecca pushed a catering waiter off of the penthouse suite the event was taking place at bringing an end to the party ("Nathaniel Is Irrelevant.").