< Mountaintop
Edit
watch 01:36
We're Getting Mutants in the MCU - The Loop
Do you like this video?
Play Sound 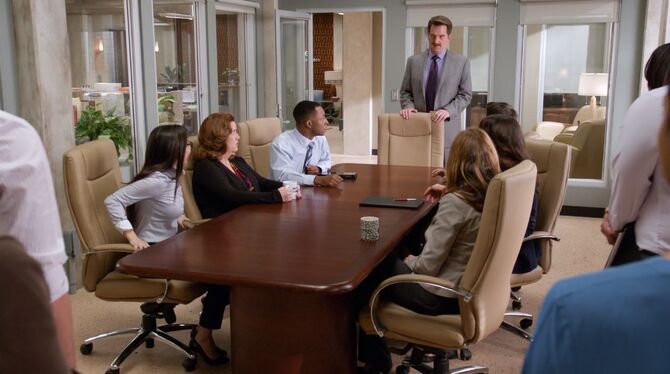 The boardroom is the area at the law firm of Whitefeather & Associates where conferences are held. Both client and staff meetings are held there and the table inside can seat up to eight people. It's first appearance was in the Season One episode "Josh's Girlfriend is Really Cool!".

In 2015, not long after being hired by the firm, attorney Rebecca Bunch was in the boardroom ostensibly to prepare for an arbitration meeting with a new client. Instead she was online looking up Valencia Perez, the girlfriend of her ex-boyfriend Josh Chan who she moved to West Covina, California for. She was impressed with how cool Valencia was based on all the various social media accounts Rebecca had perused. The head of paralegal and her new best friend Paula Proctor interrupted with supplies she brought including donuts and a New York City themed key chain gift. Rebecca was briefly distracted but soon turned her attention back to her research on Valencia.