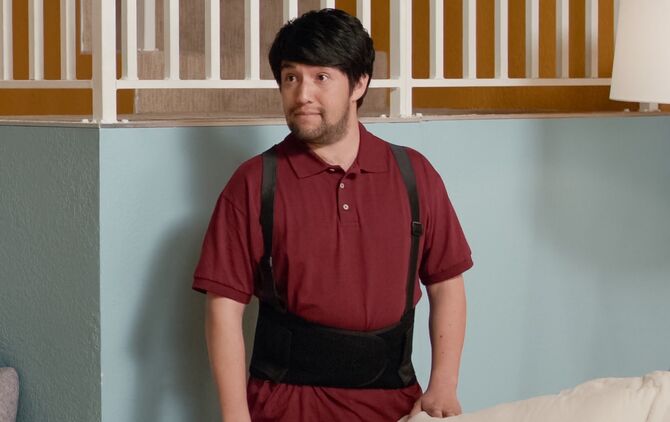 The Mover is a Hispanic employee of a West Covina, California moving service. On two separate occasions he was hired to move Rebecca Bunch's things into her apartment. He claimed not to speak any English but it's later revealed he's fluent in the language. His first appearance was in the Season One episode "Josh Just Happens to Live Here!". He is portrayed by actor Garret Mendez.

In October of 2015, a Mover was sent by his company to help transfer Rebecca Bunch's belongings into her apartment. He attempted to focus on his job but at the time Rebecca tried to engage him in conversation. As he set a box down in the kitchen of the apartment she talked about her reasons for leaving New York City to move to West Covina, California. She explained that it was just a coincidence that her ex-boyfriend named Josh Chan happened to live in this town. The mover simply responded that he didn't speak English to which Rebecca then started to talk to him in Spanish ("Josh Just Happens to Live Here!").

Months later, the mover was again hired to move something into Rebecca's apartment. This time it was at the behest of Paula Proctor, Rebecca's best friend which was a fact that she repeatedly told the mover and his partner. They were moving a yellow couch which Paula explained she bought back for her friend. Paula was accompanied by her co-worker who was also helping to oversee the move. Paula continued to brag about her friendship and mentioned that Rebecca was on her way to Hawaii with her ex-boyfriend which no one was supposed to know about. The mover sarcastically told her in Spanish that she knows how to keep a secret ("Josh Has No Idea Where I Am!").

In 2017, the mover is again hired by Rebecca this time to pack up all her things at her home. She was moving back to Scarsdale after her friends found out about a scandal she was involved in. The mover and his co-workers where let into her room by her boss Nathaniel Plimpton III. He was sure a mistake had been made but the mover showed Nathaniel the invoice. As they were packing up Rebecca's things Nathaniel grabbed a stuffed alligator toy and refused to let the mover take it. The mover suggested to Nathabiel that he just move on which he pointed out was the slogan of his moving company ("I Never Want to See Josh Again.").