My First Thanksgiving With Josh! 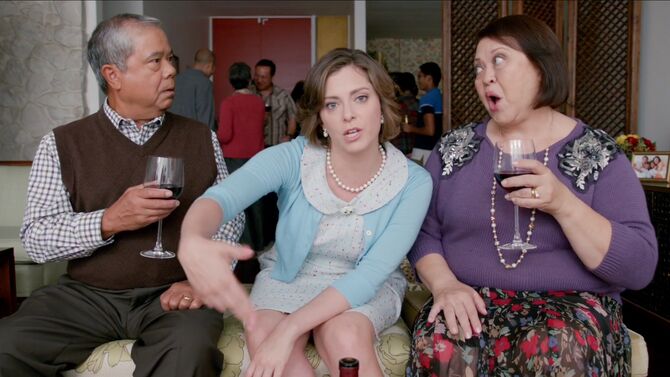 My First Thanksgiving With Josh!

At Cup of boba, Rebecca obsesses to Ben and David about her last conversation with Josh where he admitted he was attracted to her. Josh himself shows up deflating her enthusiasm and discusses a huge Thanksgiving gathering his family was having. Later at Home Base, Greg tells Rebecca that after having saved up enough money he's quitting his job, moving out of his father's place and going to business school. Besides telling his boss the only thing he has to do is find a nurse for his sick father. Valencia shows up to pick up her little sister from batting practice and ignores Rebecca. Chris reveals that Valencia does not get along with Josh's family.

Later at Whitefeather & Associates, Paula has an idea to get Rebecca closer to Josh by having her ingratiate herself to his parents. An arranged encounter with Josh's mom at an Asian grocery store gets Rebecca an invite to the Chan family's Thanksgiving dinner. Back at the bar Greg tries to quit his job in dramatic fashion. His efforts are undercut when his boss Big Kevin graciously accepts his resignation. At her home Rebecca prepares the traditional Filipino recipe dinuguan for the dinner (♫ I Give Good Parent ♫). She dresses in a conservative outfit and goes to the event wearing a spy camera Paula gave her. Paula's phone receives the stream from the camera and observes as Josh's parents fawn over Rebecca and ignore Valencia.

Over at the Serrano household, Greg has trouble telling his ailing father Marco about his plans to move out. When he finally gets the nerve to give him the news Greg finds his father unconscious and has to take him to the hospital. Greg learns Marco's illness has gotten worse and he now needs expensive treatments. At the Chan Thankgiving dinner, Valencia tells Rebecca in private that she doesn't belong here and warns her to stay away from Josh. At Home Base, Greg reluctantly asks for his job back from Kevin who re-hires him and immediately puts him to work. As Greg finishes out his shift at Home Base he laments how he's stuck in West Covina (♫ What'll It Be ♫). Meanwhile, Mrs. Chan invites Rebecca to join the family for church services.

Rebecca accepts but has to excuse herself to use the facilities because of an upset stomach. While she's in the bathroom, an arguing Josh and Valencia enter the adjacent bedroom. Over the spy cam, Paula listens in as well and believes the couple is about to break up. However, the fighting stops and Rebecca hears Josh and Valencia having sex. Rebecca exits as well and shows up just in time for Josh's announcement to his family that he and Valencia are moving in together. Meanwhile, Greg visits his father and finds out Marco knows how he used his savings to pay for the additional medical treatments. His dad tells Greg he loves him and the two watch some TV together. Elsewhere, Rebecca barely makes it back to her apartment in time to use the bathroom.

Over at the Chan residence, Lourdes gives Josh some leftovers as Valancia excitedly plans out what kind of apartment they should get. At the same time Rebecca is recovering from her diarrhea when Greg shows up with booze and tacos. He's there to make good on her earlier promise but Rebecca is forced to excuse herself to use the bathroom again. Afterwards, Rebecca and Greg eat on the couch while trying to figure out what to watch on TV. When she finds out he's staying in town because of his father she suggests he go to night school. He considers this as the two playfully engage in a pillow fight. Through the spy cam, Paul watches on concerned about their flirtatious interaction.