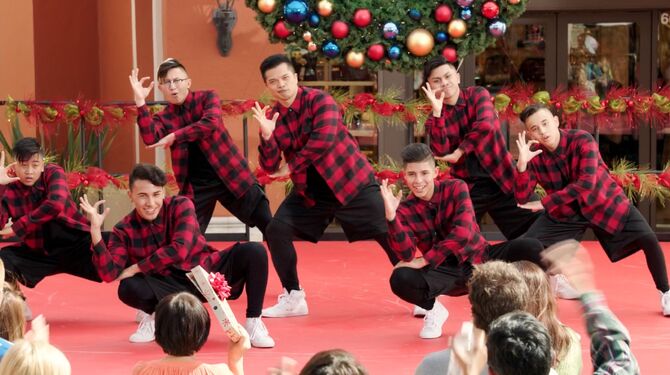 At her apartment, Rebecca is preparing for a visit from her mother Naomi. When her mom arrives she immediately nags her daughter about giving up a high paying job in New York for West Covina (♫ Where's the Bathroom? ♫). In order to please her mother, and perhaps finally receive a treasured family heirloom, she lies about how succesful her new life is in California.

Meanwhile Heather joins Greg for a Christmas dinner at his mother's house with his stepfather and half-siblings. At the dinner Heather points out how unfair Greg is being to his mother about having left him and his father years ago.

Elsewhere, Josh Chan meets a student from his alma mater named Nguyen who gives him a chance to relive his high school years as part of a Fillipino dance group. While he enjoyed performing again he realizes it's time for him to look towards the future and not dwell in the past. On the last day of her visit Rebecca's mother finds out she had been lying to her.

A few other things come to light including Rebecca's true reason for moving and her belief that her mother hates her. Rebecca's mother responds that all her worry and nagging are because she loves her daughter too much not because she hates her. While she disagrees with her daughter's recent actions she's proud to have raised her with a strong resolve.

Greg thanks Heather for helping him rebuild his relationship with his mom. The two then have a moment and share a kiss. After her mother leaves Rebecca bumps into Josh. The two commiserate over having both matured over the holidays. Everyone then comes together at the end to celebrate Christmas in California (♫ California Christmastime ♫).

Retrieved from "https://cxg.fandom.com/wiki/My_Mom,_Greg%27s_Mom_and_Josh%27s_Sweet_Dance_Moves!?oldid=18849"
Community content is available under CC-BY-SA unless otherwise noted.