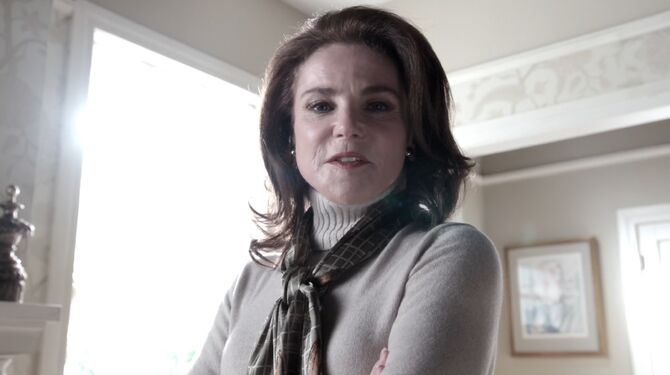 Naomi Bunch (née Garfinkel) is the mother of Rebecca Bunch and the ex-wife of Silas. When Rebecca was twelve her husband abandoned them and Naomi was forced to raised her daughter by herself. For years she pushed Rebecca to achieve academically in order for her to secure a successful future. However, Naomi's overbearing and critical nature strained her relationship with her daughter. Her first appearance was in the Season One episode "Josh Just Happens to Live Here!". She is portrayed by actress Tovah Feldshuh.

Although Naomi was raised Jewish she went against tradition to marry an Irish Catholic man named Silas. They settled down in the affluent Weschester County village of Scarsdale, New York and had a daughter together named Rebecca. The marriage was a stormy one and the conflicts between Naomi and her husband got worse especially when she suspected he was having an affair. Their incessant bickering reached a boiling point during a PPV party a twelve year old Rebecca was throwing for a few of her classmates. After years of threatening to walk out on her, Naomi's husband finally did so creating an embarrassing scene for his wife and daughter ("I Hope Josh Comes to My Party!").

With her husband gone Naomi devoted all of her energy into making sure Rebecca would become a successful lawyer. She was a very harsh critic of her daughter trying to instill in her a mental toughness to overcome any adversity. Naomi also pushed Rebecca into a rivalry against her fellow classmate Audra Levine to become the top student. When Rebecca was 13 she used her bat mitzvah money to travel to Santa Fe, New Mexico in order to see her father who had just relocated there. Silas called Naomi to tell her and she quickly got a flight to the West Coast. Rebecca was furious when she arrived to bring her back home believing Naomi was trying to keep her away from her father.

In truth Naomi pleaded with Silas to spend time with their daughter but he felt he needed more time to "find himself." Naomi took Rebecca back to New York and never told her daughter how uncaring Silas really was ("Josh Has No Idea Where I Am!"). Years later when Rebecca was 16 she managed to convince her dad to get Naomi to send her to music camp over the summer instead of mock trial intensives. When camp was over, Naomi went to pick her daughter up only to find out she had been fooling around with someone. Naomi told Rebecca that nothing was going to get in the way of her future and if need be she'd take her to an abortion clinic. A decade later, Rebecca was the top attorney at a prestigious New York law firm.

Naomi was shocked when her daughter turned down a promotion to junior partner and abruptly relocated to West Covina, California to work for a much smaller law firm. She phoned Rebecca to convince her to return but was ignored ("Josh Just Happens to Live Here!"). A few weeks later she managed to video chat with her daughter while getting a Pap test done. Naomi passive aggressively informed Rebecca that her rival Audra Levine was now living the life her daughter should have had. Audra accepted the promotion Rebecca turned down and on top of that was also marrying a successful hedge fund manager ("I'm Going on a Date with Josh's Friend!")

Months later Naomi visited her daughter during Hannukah and brought with her a precious family heirloom the Garfinkel ring. When she arrived at Rebecca's place she immediately had to use the bathroom ("Where's the Bathroom?"). She updated Rebecca on Audra Levine's success and questioned her daughter as to why she moved to California. Rebecca asked her to stop criticizing and give West Covina a chance. The next day Naomi was given a tour of Whitefeather & Associates but was unimpressed. Rebecca told her it was just a law firm she volunteered at, her work place real was far more distinguished. They then had lunch where Naomi was pleased to meet a British friend of Rebecca named Paula who happened to be Jewish.

That night they exchanged gifts and Rebecca gave her a glass candy dish while Naomi got her a vase. They were interrupted when Rebecca got a call from her client Calvin Young. Rebecca wanted to put off handling a legal emergency he wanted her to deal with but Naomi insisted she put business first. Together they went to have dinner with Calvin during which Naomi aggressively flirted with him. When he stepped out for a phone call Naomi told Rebecca to go so she and Calvin could continue their evening alone. After Rebecca had a private conversation with Calvin, her daughter told her that although he was interested she personally vetoed anything from happening since it would be a breach of lawyer/client ethics.

On the last day of her visit, Naomi went with Rebecca to an outdoor mall to exchange the gift her daughter bought her. It was there Naomi stumbled upon the answer for Rebecca's sudden move. Josh Chan was performing with a dance troupe at the mall, making Rebecca's motivations transparent. Naomi strongly condemned her daughter's actions, prompting Rebecca to unleash a rant about how she's tried in vain to please her mother to no avail. Rebecca believed Naomi hated her because she was a product of her marriage to Silas which was the source of all her bitterness. Naomi explained that her harsh criticisms were meant to strengthen her. Naomi said she was actually proud Rebecca stood up to her.

Naomi vehemently objected to the notion that she doesn't love Rebecca. This cathartic revelation brought about a happy resolution to Rebecca and Naomi's conflict. Before leaving to catch an Uber transport to the airport, Naomi convinced Rebecca to come home for Passover ("My Mom, Greg's Mom and Josh's Sweet Dance Moves!"). Months later, news of Rebecca's high profile case against Greater City Water reached Naomi in New York. She was so proud that her daughter was being hailed by the national press as a hero she finally sent the Garfinkel ring to Rebecca via FedEx ("Josh is Going to Hawaii!")

Rebecca went to Scarsdale to her cousin's Bar Mitzvah. She and Josh stayed at the Bunch residence. At first, Naomi did not like Josh, but they quickly bonded. ("Will Scarsdale Like Josh's Shayna Punim?") Rebecca later called her to help her get ready for the wedding, but she was busy. ("Is Josh Free in Two Weeks?") Naomi was present at Rebecca and Josh's wedding. ("Can Josh Take A Leap Of Faith?")

Naomi invited Rebecca to visit her at Paula's request. One day, she looked at Rebecca's laptop and was shocked to see that she's been researching ways to commit suicide. She decided to spice Rebecca's drinks with anti-anxiety pills without her knowledge. At first, Rebecca bonded with her mother. (♫ Maybe She's Not Such A Heinous Bitch After All ♫). When Rebecca discovered her agenda, she left Scarsdale and tried to commit suicide on a plane. ("I Never Want to See Josh Again.")

Retrieved from "https://cxg.fandom.com/wiki/Naomi_Bunch?oldid=18988"
Community content is available under CC-BY-SA unless otherwise noted.