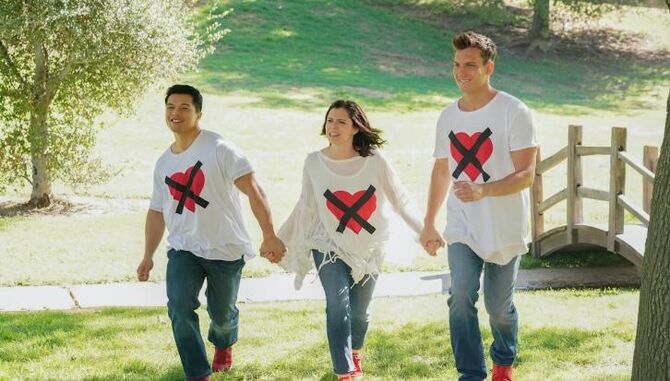 Nathaniel Gets the Message!

Rebecca explains to Nathaniel she can't be in a relationship without it becoming an obsession. She warns him her actions will escalate, much like what previously happened with Nathaniel Senior. Rebecca tells him she can't be with him now and quickly leaves. Later she tells Dr. Shin what happened and that on top of her heartache she has nothing to do with all her spare time. Shin points out the passion she put into her obsessions could have been better spent on more positive efforts. When he suggests volunteering Rebecca considers the possibility (♫ Without Love You Can Save the World ♫). At Home Base, WhiJo complains to Josh Chan about Darryl being incommunicado after thier mutual breakup.

When Josh pays for their drinks with cash he tells WhiJo he got a job as a volunteer fireman. At Sugar Face, Paula encourages Darryl to try again after another fertilization procedure he paid for failed. Darryl goes to Whitefeather & Associates and gets an opportunity to finance another attempt when he’s invited by Jim and Tim to play a poker game. That night at Rebecca and Heather's house, Valencia joins them to work on an event she’s planning. Rebecca follows Dr. Shin’s suggestion and volunteers to help her friend. Over at Home Base, Nathaniel and WhiJo run into each other while cheating on their diets. Nathaniel suggest they start an intense excercise regime for a week to get over being dumped.

The next day at Rebecca’s house, she finishes balancing both her and Valencia’s checking accounts and offers to accompany her friend when she sees her clients. Over at Nathaniel’s apartment, he and WhiJo continue to bond as they use his new home workout machine. That evening at Home Base, Valencia and Rebecca meet with Marty and Ally to plan their low budget engagement party. Afterwards, Rebecca believes Ally doesn’t really love Marty and intends to warn him. Valencia pleads with Rebecca not to get involved as she needs the event to happen in order to keep her business afloat. Meanwhile at Whitefeather & Associates, Darryl plays poker with Mrs. Hernandez, Jim, Tim and Father Brah.

The following day Nathaniel and WhiJo succeed in their seven day workout goals and decide to celebrate. At Home Base, Valencia and Rebecca show off the redecorated bar to Ally and Marty for their engagement that night. Rebecca remains suspicious of Ally and starts to think she’s cheating on Marty. Over at Sugar Face, Josh vaguely confides in Father Brah about how directionless his life is now. Brah tells him it’s okay to feel sad over whatever his situation is now and compliments Josh on how in shape he is. That night, Nathaniel and WhiJo go to a gay bar while at the firm Darryl’s winning streak at poker comes to an end when he loses all his winnings to Mrs. Hernandez.

Over at Home Base, Valencia throws Marty and Ally an Oktoberfest themed engagement party with assistance from Rebecca and Heather. Rebecca follows Ally when she leaves to take a phone call from what appears to be a boyfriend. When Brody later delivers a toast, Rebecca sees Ally flirting with a newly arrived guest. At the gay bar, WhiJo and Nathaniel are depressed since they are still not over getting dumped. They are confronted by women having a bachelorette party who don’t understand why such hot guys have anything to be sad about. At these words WhiJo and Nathaniel have a mutual reverie (♫ Fit Hot Guys Have Problems Too ♫) during which they find out Josh is a go-go dancer at the bar.

Afterwards, Josh tells WhiJo he was too embarrassed to tell him about his new job. Nathaniel then appears and introduces them to an old friend he met in the bar named Mona, a fellow Stanford graduate. At Home Base, Rebecca finds Ally making out with the guest she saw earlier. Rebecca then disrupts a toast from Marty’s grandmother to publicly declare Ally is a cheater. Marty already knew this but loves Ally anyway and is angry Rebecca meddled in his personal life. The next day at Sugar Face, Rebecca and Darryl console each other over their recent mistakes. Darryl’s kindness causes Rebecca to make a rash decision. Later at her home, Rebecca tells Paula she’s giving Darryl an egg to fertilize.

Retrieved from "https://cxg.fandom.com/wiki/Nathaniel_Gets_the_Message!?oldid=17584"
Community content is available under CC-BY-SA unless otherwise noted.